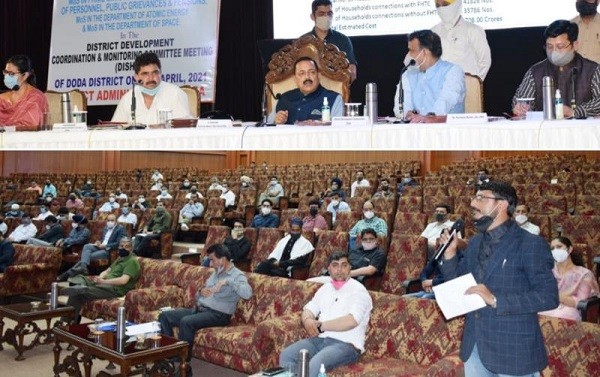 JAMMU, APRIL 17: Union Minister of State (Independent Charge) for the Ministry of Development of North Eastern Region and Minister of State for Prime Minister’s Office, Dr Jitendra Singh today called upon the public representatives to act as bridge between people and administration.

The DDC informed the union Minister that increasing female literacy and filling up vacant posts in education sector need to be given special attention. He said that Government Medical College Doda is nearing completion and will be ready for admission of fresh batch of medical students by June this year. Regarding Covid pandemic, the DDC informed that all the active cases are being routinely monitored by the Health Department and RTPCR testing was being done vigorously.

Further, it was informed that a 100 bedded Covid Care Centre and another 40 bedded centre with the provision of ventilators was also available with the district administration. He also sought help from the public representatives in educating people about preventive measures against spread of Covid-19.

The DDC Chairman raised issue of shortage of ambulance and demanded more ambulances to meet the requirement. He also highlighted the issue of road accidents and demanded improvement in the condition of the roads by constructing crash barriers to save innocent lives. The Union Minister took notice of the issue and also suggested for keeping close check on overloading to minimize the road mishaps.

Dr Jitendra Singh inquired about the status of works being carried under the Deen Dayal Upadhyaya Gram Jyoti Yojana and the Har Ghar Nal Se Jal programme, under Jal Jeevan Mission. He asked the public representatives to actively participate in implementation of these ambitious programmes for their effective implementation on the ground. While discussing the PMJAY-SEHAT scheme, Dr Jitendra Singh directed the district administration to make promotional videos involving beneficiaries of the scheme to motivate the people for registration.

He appreciated the district administration for achieving 100 percent coverage under Kissan Credit Card scheme. The administration was also directed to expedite works under Pradhan Mantri Awaas Yojana (G) to provide pucca houses to all eligible households by 2022.

Threadbare discussion was held on the Pradhan Mantri Gram Sadak Yojana (PMGSY). The DDC informed that Doda ranks 11th all over India in building roads under it.

Dr Jitendra Singh, while appreciating the achievement, said Sarpanchs and Panchs have the responsibility of setting priority of works under the scheme. He also asked them to identify and cover the left out eligible beneficiaries under the Pradhan Mantri Ujjwala Yojana.

Similarly, execution of MGNREGA works, expediting issuance of Domicile and other certificates were also discussed in the meeting. Dr Jitendra Singh directed the NHIDCL to hire maximum number of locals for Chenani-Sudhmahadev-Khellani highway project. “The company should engage maximum number of workers, especially unskilled ones, from among the locals,” he maintained.