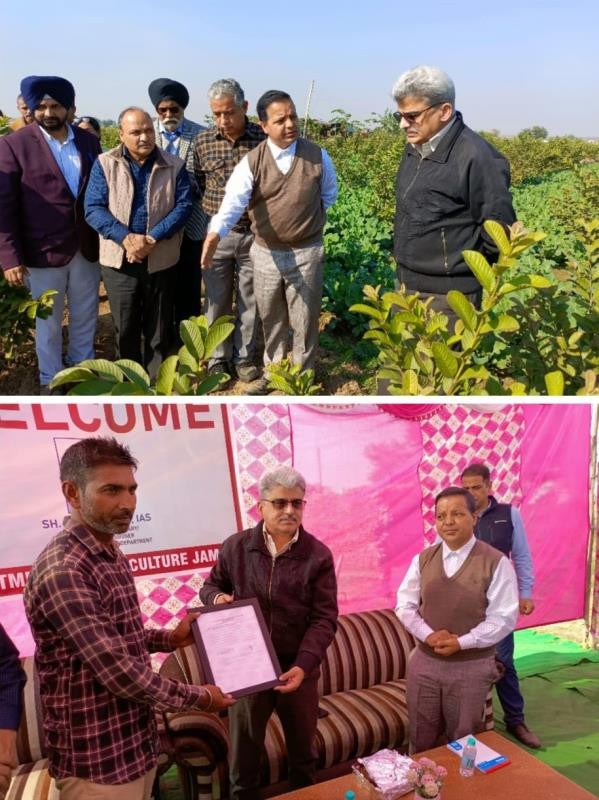 On the occasion, he was accompanied by Director Horticulture Jammu, Ram Savak, PRI members and other officers of the department.

Dulloo also planted a sapling of Guava cv. Taiwan pink in the farmer’s field at Kadyal for plantation of Guava in 100 kanal area.

The ACS also chaired a Interaction Programme in the field of a progressive farmer namely Sukhdev Singh at Kadyal who has adopted a multi-tier cropping pattern by planting Teak, Strawberry & Guava in his field.

While speaking on the occasion, ACS said that there is a great scope of horticulture sector in the area especially Strawberry and plantation of High Density orchards of Guava & Litchi.

He asked the farmers to adopt the diversification of crops in their fields so that they can earn during the whole year.

Atal Dulloo laid emphasis on plantation of Strawberry as this is a short duration crop and by adopting cultivation of this crop, the farmers can enhance their income manifold.

He also interacted with the farmers who informed the chair about the income they are generating from plantation of horticulture crops especially strawberry and also about the benefits from the horticulture department.

The ACS also handed over the sanction letters to the beneficiaries of R.S Pura zone for “On farm handling unit (pack house)” & “Power tiller”. Later, Atal Dulloo visited the Govt. Grape Farm Maralia and inspected the bower system of grape.

He impressed upon officers to enhance production of Grape plants and also laid thrust on production of quality planting material so that the common farmer is benefitted.