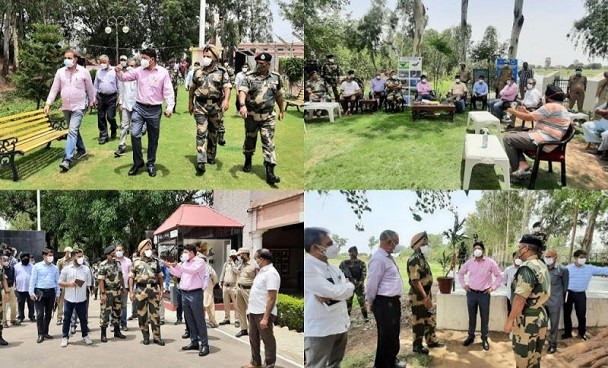 JAMMU, JUNE 15: Divisional Commissioner Jammu, Dr Raghav Langer on Tuesday conducted an extensive tour of Suchetgarh, Gharana wetland circuit and assessed the development of facilities at these potential sites for the tourists.

Pertinently, the Government has planned to develop and promote border tourism by developing frontline Suchetgarh area on the pattern of Wagah Border. During the tour to the border outpost, the Div Com directed the tourism department to create additional facilities to attract maximum footfall of tourists to Suchetgarh.

The Div Com took a round of the border outpost and inspected many utilities including, gallery, canteen, park, pond area and assessed the required development of facilities for the visitors.

He also issued slew of instructions to promote Suchetgarh as a border tourist destination and directed for extension of parks for the visitors, development of pond, installation of lights, benches, cafeteria, blacktopping of roads etc. He also instructed the BSF authorities for construction of vertical sitting space for the audience for watching retreat ceremonies on the pattern of Wagah Border.

The concerned officers informed that various tourism infrastructure projects for the development of Suchetgarh border tourism have been completed, while some are at final stages of completion.

The works completed include Multipurpose Hall with souvenirs and cafeteria, security cabins and gender based toilets with changing rooms, beautification from entry gate to IB with paver blocks, chain links and wire mesh wall, Hall of Fame displaying photos of citations of gallantry awardees and BSF documentaries.

The Div Com directed the officers of the tourism department to pursue the DPR to promote border tourism on the pattern of Wagah Border.

Meanwhile, the Divisional Commissioner alongwith other concerned officers visited Gharana Wetland and reviewed the facilities there and discussed issues related to land acquisition.

The Sub Divisional Magistrate, R S Pura apprised the Div Com about the details of the total land to be acquired and the steps taken in this regard so far by the administration. He also asked the officers of the Wildlife Protection department to take steps to conserve the Wetland and promote it as a major tourist attraction.

The Div Com also interacted with the locals and listened to their issues. They apprised the Div Com about the delay in payment of land compensation and other issues of public importance. The public of the village also handed over a memorandum of demand to the Div Com.

The Div Com gave patient hearing to the PRIs, Locals and assured them that all their genuine issues would get resolved. He also directed the SDM for conducting detailed assessment of structures, trees, Pump sets etc. on the land which is to be acquired.

Later, en-route the Div Com visited the old Railway Station site at R S Pura and directed the tourism department to explore the possibilities for its development as heritage site for promotion of tourism in the area.

“Development of new attractions and up-gradation and improvement of the existing infrastructure for promotion of tourism is one of the priority sectors of the government”, the Div Com said.