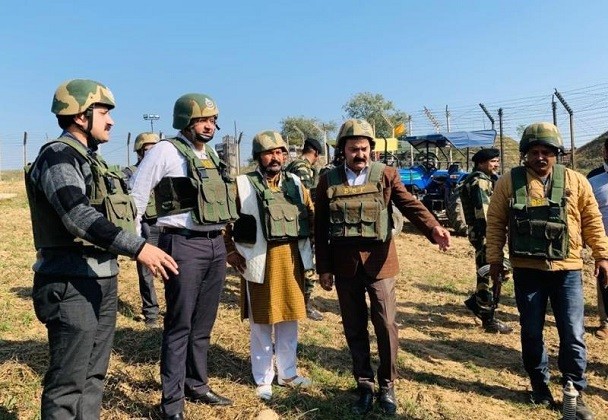 Appreciating the courage and hardwok of the local farmers, Dr Langer said the UT administration along with BSF authorities is actively pursuing the potential of cultivation in the border belt so that farming communities get maximum benefit from the chunk of land which was lying unutilized hitherto.

He assured the farming community of all possible help to bring more area along IB under cultivation so as to motivate other farmers of the area.

Dr Langer suggested the adoption of mechanised ways of farming by establishing machinery banks under BADP, SSY schemes so as to empower local farming communities in reaping rich dividends from their produce.

Later, Dr Langer presided over the proceedings of block Diwas at R.C Farms Marheen wherein he threw light on the object of public outreach initiative (Black Diwas) of the government to listen to the grievances at doorsteps of the people.

After giving a patient hearing to the demands and grievances raised by the people, PRIs Dr Raghav said that developmental goals can be achieved through proper coordination and cooperation of all stakeholders.

Referring to the avenues of opportunities in border areas, Dr Raghav Langer said youth should aim at becoming a job creator rather than job seeker.

He said youth should explore opportunities in entrepreneurship by availing self employment opportunities extended by the government.