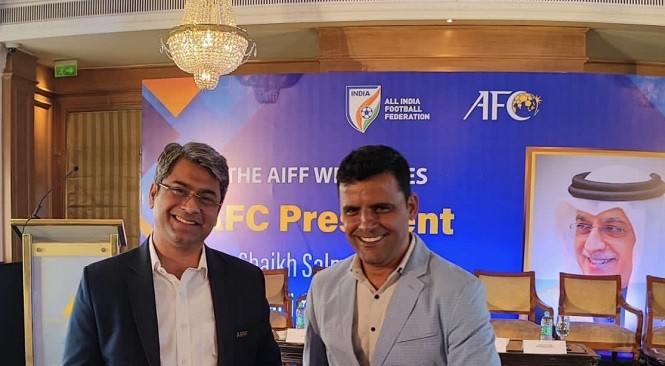 NEW DELHI, Oct 31:  Footballer of international repute from Jammu and Kashmir, Arun Malhotra today briefed the president of All India football Federation (AIFF), Kalyan Chouby about the football scenario back home in J&K.

Arun talked about the programmes and plans need to be undertaken for widening and strengthening the gross root level football and the methodologies to be adopted for producing national and international talent from J&K. He told the AIFF higher ups that J&K has high hopes from the new body and look forward for working together to achieve the desired results.

Arun was recently on a private visit to Kashmir where he interacted with managements of prominent clubs, trainees of the academies and members of the J&K Football Association at various places. The AIFF president and Arun met on the sidelines of the felicitation function organised by the AIFF to honour visiting AFC president and vice president of FIFA, Shaikh Salman bin Ibrahim Al Khalifa at Taj Hotel in Mumbai.

The AFC president along with general secretary, Datuk Windsor John and deputy general secretary, Vahid Kardany were felicitated by AIFF in Navi Mumbai on their visit in India in connection with FIFA U-17 Women’s World Cup. Colombia takes on Spain in the final today at DY Patil Stadium. Arun also got the chance to meet and interact with AFC president and other members of the Confederation. Present at the felicitation function were AIFF vice president, NA Haris, secretary general, Dr. Shaji Prabhakaran and treasurer, Kipa Ajay as also members of the AIFF Executive Committee, Technical Committee and State Associations.