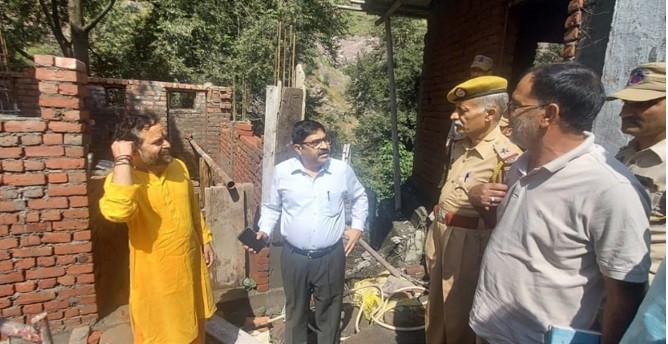 The  Deputy Commissioner  inspected the  SDH Mandi. He took a round of different wards and also inspected Jan Ashudya Kendra.

The DDC appreciated the staff while inspecting the Blood Donation Camp organised inside the hospital by BMO Mandi. Around 23 points of blood of different groups were collected and later sent to District Hospital Poonch.

The Deputy Commissioner gave instructions about biometric attendance of employees. He also inspected  the construction work of the hospital building and gave directions for its early completion.

He also interacted with PRI members and listened to their issues regarding development in their areas, especially the demand for blacktopping of roads in the Mandi town. The DC gave on the spot directions to the concerned officers for Blacktopping of internal roads of Mandi Town and early completion of  drainage renovation work. The DC inspected the ongoing work of toilets at Mandir site under MP Fund and directed the AEE, PWD, N.U Khan for its early completion.

The Deputy Commissioner also visited the construction sites of multipurpose Indoor Sports Stadium and 100 meter PSC Bridge along with the AEE Khurshid Ahmed Chowdhary. During the inspection, he   instructed to speed up the work and also appreciated the completion of the work upto the current stage.

In addition to this, the DDC also listened to the problems of JKPCC Contractors as well as employees regarding  release of their payments and salary, respectively. He assured to talk with the managing director JKPCC to solve the issue.