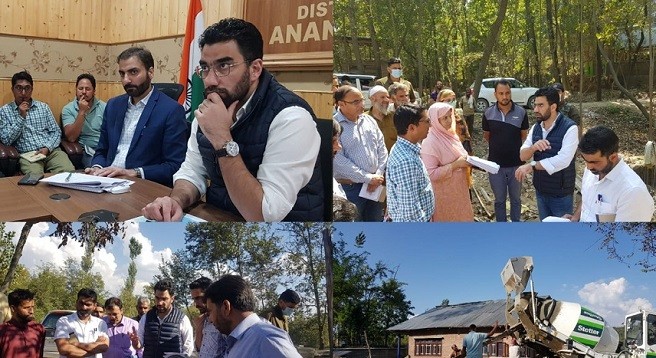 During the spot visits, Mission Director interacted with the local communities, Gram Panchayat members and Pani Samitis constituted for successful implementation of the Mission. He was informed that the works under JJM have been planned and are being executed with the active involvement of public institutions.

He directed the officers and officials of PHE department to strengthen the ground level institutional mechanism, i.e. Gram Panchayats and Pani Samitis so that they can play an efficient role in planning, implementation besides operation and maintenance of water supply infrastructure especially for identification of a sustainable source.

Later, Mission Director chaired a meeting of officers to review implementation of Jal Jeevan Mission in the district.

During the meeting, it was informed that the district has planned a total number of 362 water supply schemes to be established involving 60 bore-wells, tube-wells and dug-wells, 25 Over Head Tanks, 39 Rapid Sand Filtration Plants and 388 works of pipe network, Service Reservoirs, Slow Sand Filtration Plants and other allied works at a total estimated cost of Rs. 849.69 crore. It was also informed that almost all the schemes have been accorded administrative approvals and technical sanction.

Mission Director directed the officers to expedite the process of tendering and allotment of remaining works so that the execution is completed within the set time lines.

He impressed upon the field officers to work with high zeal and dedication while maintaining utmost transparency and integrity in implementation of the Mission strictly as per JJM guidelines. He directed for a widespread IEC campaign to be held at district, block and village level for creating awareness in the public about the objectives of the mission.

District Development Commissioner assured implementation of all the instructions issued by the Mission Director during his visit to the district.