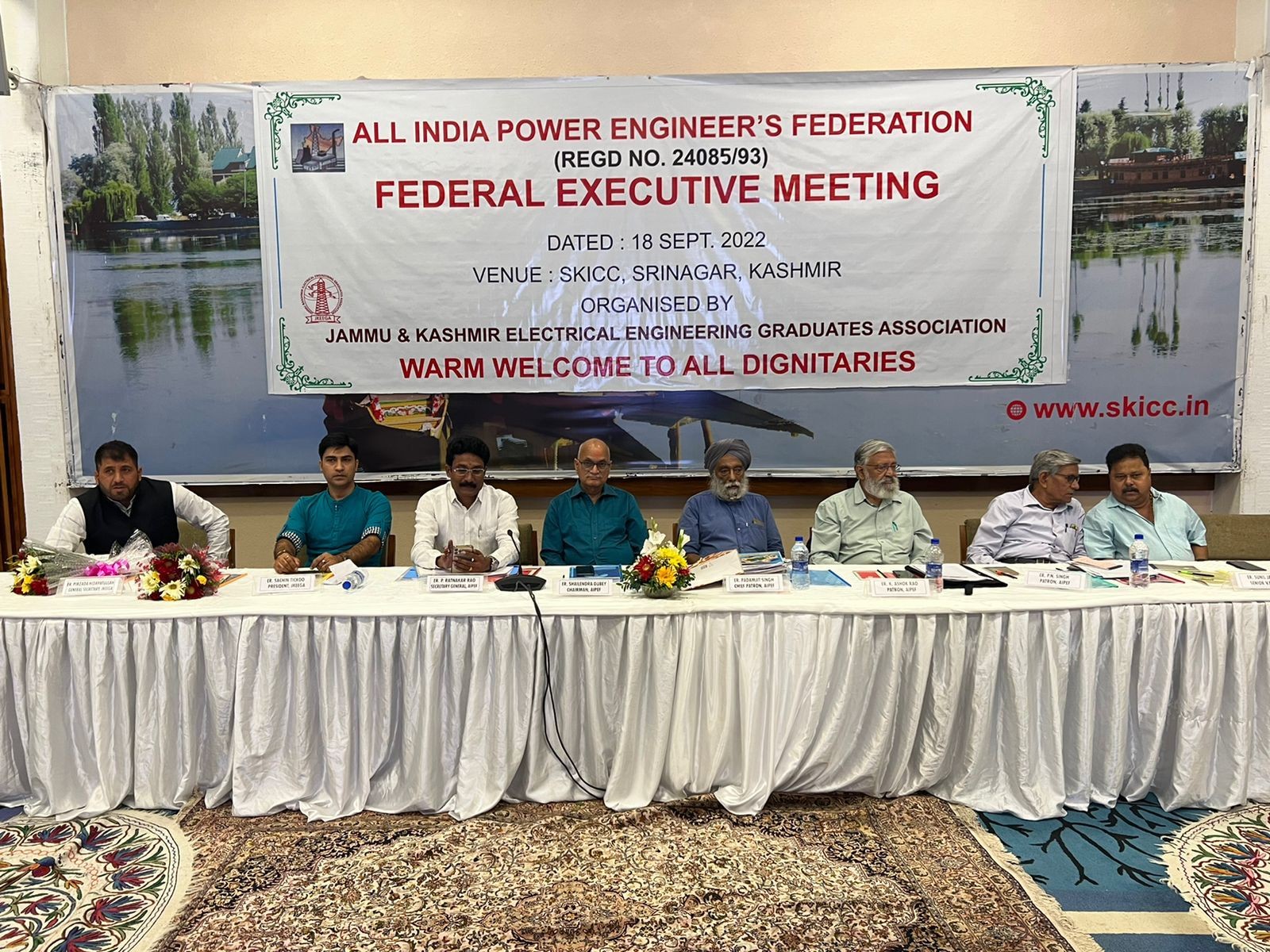 JAMMU, Sep 18:  Federal Executive Meeting of All India Power Engineers Federation(AIPEF) hosted by Jammu and Kashmir Electrical engineering Graduates Association was held in Srinagar today which was Chaired by Er. Shailendra Dubey Chairman AIPEF and participants from all the state constituents

. It is noteworthy that the All India Power Engineers Federation is celebrating its Golden Jubilee year and the first meeting of the All India Power Engineers Federation in the Golden Jubilee year was held in Srinagar today. For the first time in the history of AIPEF, the Federal Executive Meeting of AIPEF is being held in Srinagar. JKEEGA President Sachin Tickoo and General Secy Peerzada Hidaytullah welcomed the delegates at the AIPEF meeting. About 50 delegates mainly from Telangana, Uttar Pradesh, Maharashtra, Uttarakhand, Punjab, Delhi, Jharkhand, Chhattisgarh, Madhya Pradesh, Jammu and Kashmir, Damodar Valley Corporation participated in the meeting. Federation

Chairman Shailendra Dubey, Secretary General P Ratnakar Rao, Chief Patron Padmajit Singh, Patron K Ashok Rao and PN Singh, besides Presidents and General Secretaries of Electricity Engineer Associations of various provinces attended. Federation Chairman Shailendra Dubey, while terming Electricity (Amendment) 2022 as anti-people and anti-employee, in the inaugural address called upon the power engineers across the country that the time has come to stop this anti-people bill. We will have to come on the road and one has to be ready for a nationwide strike in protest against any unilateral action of the Central Government. He said that a huge rally will be held in Delhi on November 23.

Before the rally, four Bijli Kranti Yatras will be started from the eastern, southern, western and northern parts of the country which will turn into a massive demonstration in Delhi on November 23. A massive public awareness campaign will be launched by mobilizing electricity employees and common electricity consumers through Electricity Revolution Yatras. He alleged that through the Electricity (Amendment) Bill 2022, the central government is going to privatize the entire power sector. Private companies will be given the right to supply electricity using the network of government discoms. Private companies will come to make profit and make huge profit by using the network of Government Company by giving electricity only to profitable sector i.e. industrial and commercial consumers. Only the loss-making poor domestic consumers and farmers will be left with the government power distribution companies. Naturally, the government power distribution companies will become financially poor and after that the government, the network of government power distribution companies will also pay the private companies at a penny price. He said that this bill is neither in the interest of the consumers nor in the interest of the electricity employees, so it will be made a mass movement by running a massive campaign against it. J&K Power engineer’s are suffering on account of non regularisation, stagnation at all levels, hundreds of vacancies are lying un filled in the hierarchy. The SRO of assured career progression has also not been issued till date.