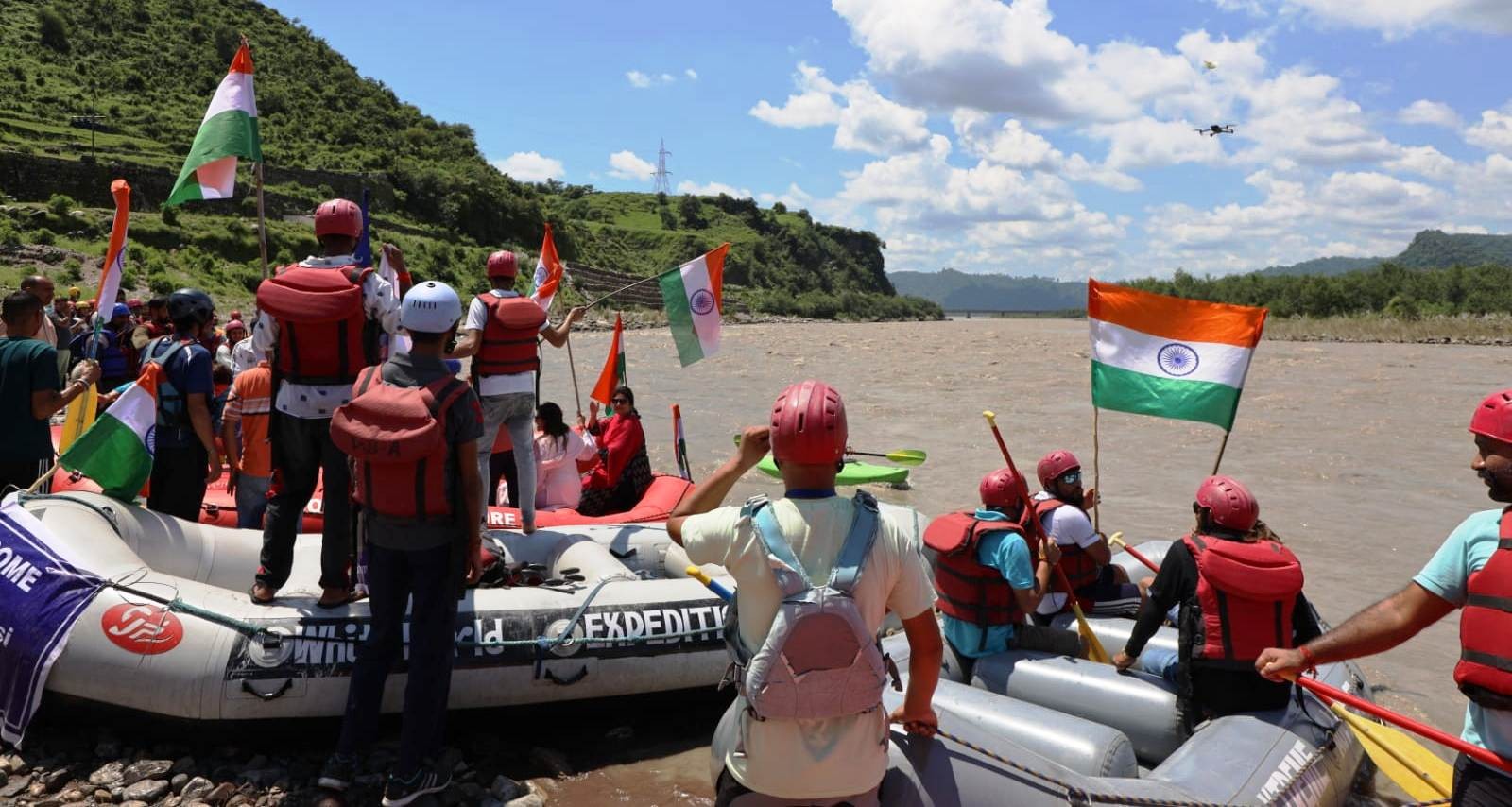 REASI, AUGUST 13: The Directorate of Tourism, Jammu, on the directions of Director Tourism, Vivekananda Rai, on Saturday organised a Bicycle Rally from Bhimgarh Fort to Syiad Baba Reasi  and Rafting at Baradari, Reasi as a part of ‘Azadi Ka Amrit Mahotsav’ and ‘Har Ghar Tiranga’ campaign.

The route of the bicycle rally passed through the Rafting site at Baradari and the mighty Chenab flowing, beside the beautiful surrounding peaks and hillocks.

Speaking on the occasion, Babila Rakwal, Deputy Commissioner Reasi, emphasized the need to organize similar adventure activities in all the off-beat destinations of Reasi District. She congratulated the tourism department for successfully conducting Paragliding, Ziplining trials at Dhanwa near Pouni and also at Mokhri which is approximately 5 kms from Katra Town.

The Directorate of Tourism Jammu also organized a Rafting event, which was also flagged off by Babila Rakwal, Deputy Commissioner, Reasi.

The Rafts moved in the gushing water of Chenab with Tricolour flying. The whole area was decorated with tricolours giving a patriotic view of the area.

The motive behind organising these events  was to imbibe the spirit of nationalism among the youth and also to promote adventure tourism in the   offbeat tourist destinations of Baradari  of Jammu region and Reasi in particular. Addressing the media, the Deputy Commissioner, Reasi congratulated the Tourism Department  for organising the events at Reasi. “The motive of organizing these events is to promote Adventure Tourism in Reasi and to divert the lakhs of pilgrims/tourists visiting the Shri Mata Vaishno Devi Ji Katra to other destinations in and around Katra” she said  and added that this will also help in promoting the unexplored destinations of the area and boost the economy  and generate employment opportunities for the local population.

The event will also encourage the spirit of adventure  among the hosts as well as spreading awareness for ‘Har Ghar Tiranga Abhiyan among the general public to mark the Azadi ka Amrit Mahotsav, she added.

Sunaina Sharma, Joint Director Tourism, Jammu said  that the celebration of India’s glorious 75 years of independence has been linked with these adventurous  activities of bicycle rally and Rafting at Reasi in order to infuse the feeling of patriotism and simultaneously encourage tourists across the nation to visit the historical Bhimgarh Fort , Syiad Baba, Baradari and nearby tourist destinations of Reasi.