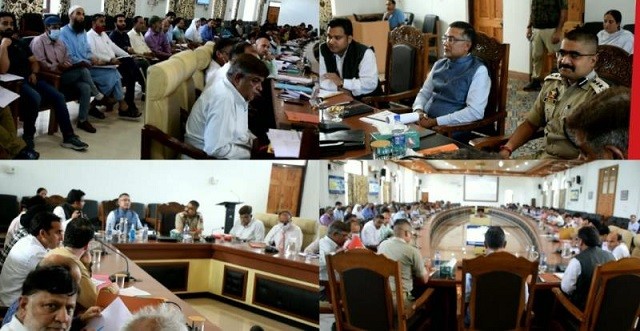 During the visit, the Principal Secretary also chaired a meeting at Dak Banglow here with senior officers of the district administration and reviewed the progress achieved on District Capex 2022- 23, CSS, JJM and other public welfare programmes.

During the meeting, the Principal Secretary took sector wise review of the District Capex, 2022- 23 and emphasised upon officers to accelerate the pace of developmental works being executed so that theyare competed within given timelines.

He impressed upon the officers to work with extra zeal and dedication in improving the performance in their respective sectors. He also sought feedback from department heads on the various developmental and welfare issues of the district.

The Principal Secretary during the meeting also reviewed Jal Jeevan Mission and sought continuous supervision over the works taken under the Mission. He stressed upon the concerned officers to work with utmost dedication so as to maximise the reach of benefits to the people.

While reviewing the Power sector in the district, Shailendra Kumar instructed for further augmentation of distribution network in the district by way of adding more receiving stations, transmission lines and transformers.

He also stressed upon the need to improve tendering and work allotment processes in order to ensure timely completion of the works as well as to ensure quality and durable asset creation.

During the meeting, the Principal Secretary also took stock of the functioning of departments like R&B,RDD, Jal Shakti, Health and Medical Education, School education, PDD, Social welfare, Horticulture, Agriculture , Fisheries, YSS, and others.

He instructed the officers to improve progress under various ambitious projects and schemes like MGNREGA, PMAY, (U & R), PMDP, Mumkin, NSAP, PM Kisan, and others.

Earlier, District Development Commissioner briefed the Principal Secretary about the overall position of developmental activities and status of works undertaken under CSS and JJM across the district.

He also apprised the Principal Secretary about the special efforts taken by the district administration in Public Service Delivery like 'Sukoon', for Quick Relief Disbursement, 'Pukaar' for 24×7 Grievance Redressal and other welfare and IT initiatives.

The DDC also informed the Principal Secretary about various initiatives taken up for livelihood improvements in district especially in developing Homestays at Pahalgam, Honey Processing Plants across the district as well as capacity building and trainings of PRIs in the district.