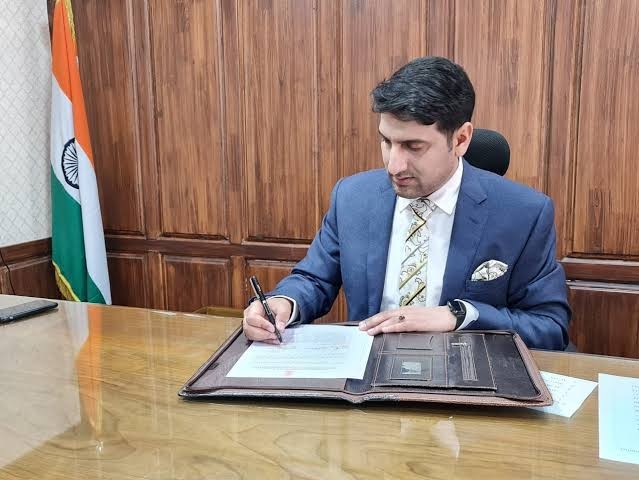 SRINAGAR, June 23: To review the overall performance of the Banks and other Financial Institutions under Annual District Credit Plan of Srinagar District for financial year 2022-23, a meeting of District Level Review Committee (DLRC) was held under the Chairmanship of Deputy Commissioner (DC) Srinagar, Mohammed Aijaz Asad at Meeting Hall of the DC Office Complex, here on Thursday.

At the outset, the DC was informed that at the end of the period under review total Deposits of the District Srinagar stood at Rs. 28,092.38 crore and Advance at Rs. 15110.56 Crore constitute 54 percent CD Ratio. Besides Banks have disbursed Rs. 5411.51 crore among 1,07,378 beneficiaries achieving 82 percent of the Annual targets under Annual Credit Plan for financial year 2021-2022, which Includes Rs. 1702.28 Crore under priority sector and Rs. 3709.23 Crore in non-priority sector.

The DC was further apprised that under Prime Ministers Mudra Scheme Banks operating in the District have disbursed Rs. 524.56 crore among 17588 beneficiaries of Srinagar. While, under PMEG Programme, total 1519 cases were sanctioned and an amount of Rs 80.61 crore were disbursed.

Similarly, giving overview of credit disbursement through different schemes, the Lead District Bank Manager, Abdul Majid apprised the chair that under Pradhan Mantri SVANIDHI schemes Rs 5.75 crore were disbursed among 5657 registered street vendors in the district under which Urban Street Vendors are eligible to avail a loan of Rs 10000 with tenure of one year with interest subsidy of 7 percent for handholding of youth.

With regard to implementation of Nation Urban Livelihood Mission(NULM), a total 1029 cases were sanctioned with disbursement of Rs. 18.67 crore among the beneficiaries in the District.  Under the Mumkin scheme, a total 186 cases have been sanctioned so far involving an amount of Rs 9.17 crore.

The chair was also informed that, over 100 Financial Literacy Camps were organized by FLC Centre Srinagar. While in connection with ongoing “Azadi Ka Amrit Mohatsav”, banks operating in Srinagar have organized about 127 Credit Outreach Programs/FLC camps in which more than 2000 people participated during which Rs16.04 crore were sanctioned under different schemes Cores and 650 beneficiaries were registered under different social Security Schemes.

Speaking on the occasion, the DC called upon all the line Departments and Banks operating in the district to work in unison with added vigour and zeal to achieve targets in a time bound manner. He also advised the representatives of financial institutions and sponsoring agencies to come forward and help the unemployed youth of the capital for eradicating poverty, unemployment and reaching out to the target population.

The DC said the Credit Ecosystem should create a Win-Win Model for both Banks and Borrowers. He also stressed on enhancement in the overall credit flow of banks in the district which is essential for financial impetus and improving income levels and thereby help in raising standard of living of people. He also asked Banks and all line departments to encourage novice entrepreneurs under economic activities to inspire them for setting up viable income generating units in the district.

Responding to the issues raised by the representatives of various banks particularly regarding NPA accounts, the DC assured them that all possible support will be provided for proper settlement/recovery of all such cases. He said that default culture will not be encouraged at all to ensure better credit linkage ecosystem to the customers and to ensure smooth functioning of the banks in the District.