Home » News » J and K » H&UDD boss orders inquiry in illegal regularizations in Srinagar? Why not in JMC/JDA?

Jammu, June 23: H&UDD boss recently issued two enquiry orders against Local Bodies & other sister concern of Srinagar regarding illegal appopintments & regularizations but one should observe that no enquiry ordered over illegal issues committed by JMC/JDA bosses.

If enquired by a high level enquiry committee, it shall be found that long back some officers placed as Junior Engineer in JMC/JDA raised up to Comissioner JMC/ Xen but had some body looked by which rules were placed as AE/AEE/XEN/SE but in genuine case they are harassing innocents despite eligible ones.

JMC taking away rights of genuines by bringing officers on deputation, especially in building section with the consent of Anil Raina CTP, who had been assigned double charge to make double engine for himself?

Khilaf warzi Wing  in JDA is working with non technical STaff is no doubts a matter of great concern and is in violation of  so called rules.

H&UDD did not bothered to act on JMC/JDA top bosses along with CTP/STPs for deciding Land Use in pick & choose manner without framing Zonal Plans, which was mandatory as per  rules of the said dept as per Development Act of 1970?

Recently, Anil raina, CTP commentted to VC JDA  over one permission that Bye Laws of that structure is not in MP-2032 but the structure in Uses Permitted in the MP-2032 & one non Technical boss, the VC JDA, endorced the same, no doubts a matter of high level enquiry to tally each & every item of Permitted uses in MP-2032 with respect to Bye Laws , especially for illegal observation in one case, nearby countless buildings constructed in Birpur by the the boss CTP, Anil Raina.,

Now, it is a question on Anil raina, that had as STP , since issuance of MP-2032 in 2017, March, he ever bothered to comment ragarding the issue of non incorporation of Bye Laws of each & every item in MP-2032 as per Permitted uses & how he was doing the excercise of building permissions without that, which shall follow...

Lot of written complaints stands  made to the big boss, Pr secretary, H&UDD regarding the countless illegalities in JMC/JDA by CTP's but no actions till date could not understood.

However, latest enquiry ordered by the Govt, copy with CTN reads as under:- 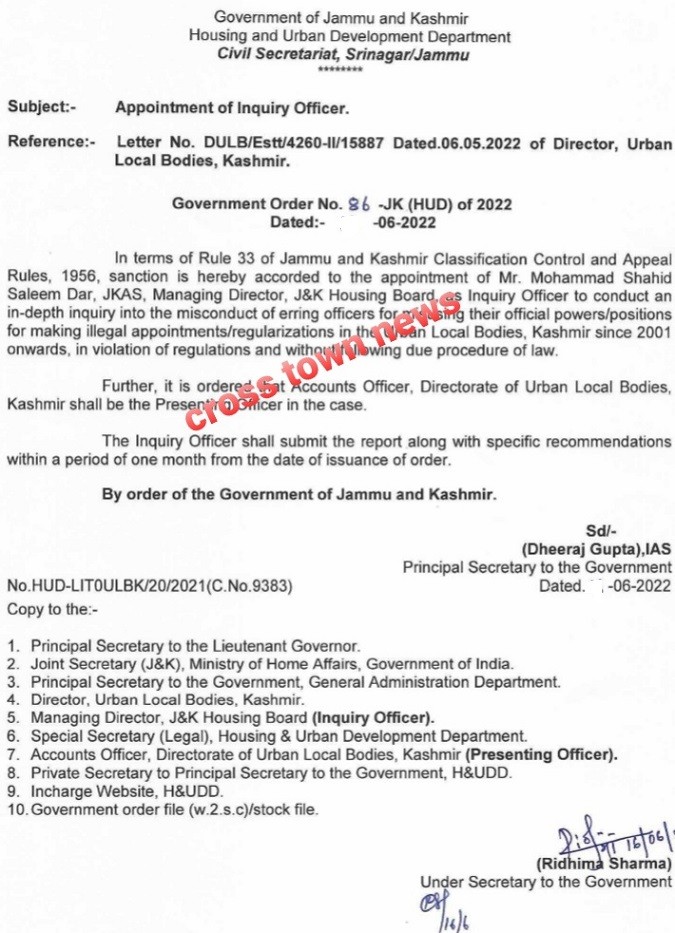