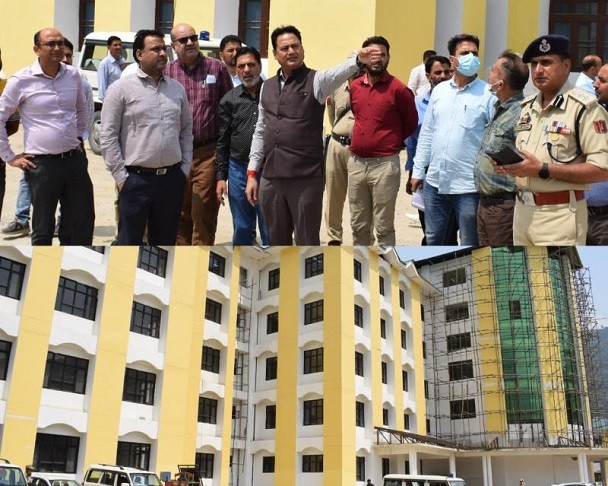 He also informed about the physical and financial status of several major projects including GMC Doda and NHW projects.

DC apprised that 1683 projects have been completed securing highest place in Jammu division in terms of physical progress.

It was informed that the tendering process has been initiated for approved works for the current financial year. He asked for ensuring completion of tendering and allotment in next three months.

Regarding progress on GMC Doda, Hirdesh Kumar was apprised that temporary power and water supply has been ensured to the institution so that it may be made functional within next one week.

Besides, work on dedicated water supply scheme and receiving station is going on war footing.

CMO informed that the Gandoh hospital has been shifted to the newly constructed 100 bedded building while additional requirements for the fully operationalization of the Institute have been submitted to the authorities and the old hospital building has been handed over to Government Higher Secondary School Gandoh.

Commissioner Secretary, while reviewing rural electrification, sought a detailed report from the project wing and JPDCL regarding left out un-electrified habitations.

He asked the Jal Shakti department to speed up tendering process of all 189 schemes and ensure simultaneous tendering of the filtration plants and other allied works approved under JJM.

He also took stock of PMGSY and asked the officers to ensure all projects are completed by August 2022.

He appreciated the local administration for achieving excellence at national level by being among the highest performing districts in the county. Further, he also reviewed coverage under Ayushmaan Bharat, KCC, PM Kissan, Pensions, Scholarships, E- Shram, and various Social Security Schemes. Commissioner Secretary appreciated the district administration for achieving over 300% progress last year in the realm of self employment generation schemes. Social Security Schemes like PMSBY, PMJJBY, APY, MUDRA, Start Up India were also discussed in detail. Meanwhile, Rural Development schemes like MGNREGA, 14th FC, SBM PMAY were also discussed besides holding deliberation on details of land identified for proposed Drivers training-cum- fitness institute. Later, Administrative Secretary inspected GMC Doda's main campus at Ghat and took stock of facilities available there. He directed the executing agency to speed up the remaining works, start laying of boundary wall around the buildings so that safety of students and the assets as well is ensured. He asked PDD and Jal Shakti departments to make reliable availability of electricity and drinking water in the campus till the dedicated sub station, water reservoir and pipeline is made operational. DDC Chairman Doda, Dhananter Singh Kotwal, also met Hirdesh Kumar and discussed the development scenario besides highlighting issues requiring pursuance at the highest level.