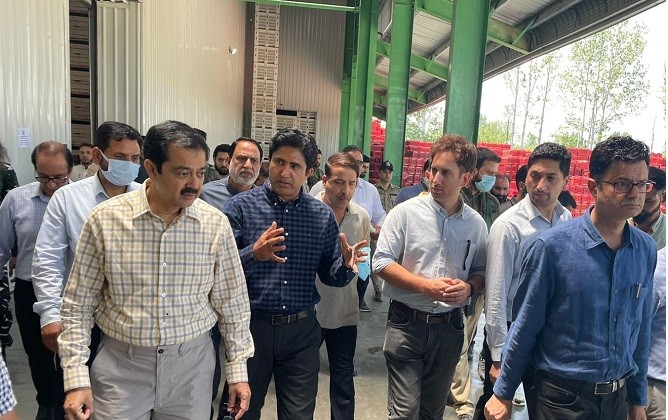 He was accompanied by Deputy Commissioner, Pulwama, Baseer-ul-Haq Chaudhary and Director, I&C, Kashmir, Mehmood Ahmad Shah besides  officers from other concerned departments.

ACS visited some new industrial units coming up in the estate and had an extensive round of infrastructure of manufacturing units.

He appreciated their business model and the state of the art technology engaged to add value to the local produce. He recognized and lauded their contribution towards self-reliance and employment generation.

During his interaction with young entrepreneurs, Vivek Bhardwaj expressed happiness and satisfaction over overall growth of Industrial sector in general and CA stores in particular in the district, over the last few years.

Further, he was also briefed about the emergence of Controlled Atmosphere storages in IGC Lassipora, as the estate houses around twenty CA stores with an aggregative capacity of almost one lac MTs and an equivalent number of such units are under establishment under New Industrial Policy.

On the occasion, ACS stressed on establishment of more such units in the estate, owing to the scope of such activities in integration of horticulture to Industry viz-a-viz role in employment generation.

He assured that all the genuine demands will be examined and addressed on priority.