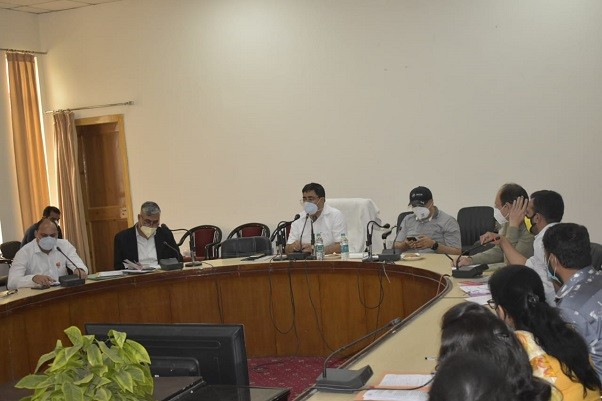 Rajouri, May, 04: District Magistrate Rajouri, Rajesh Kumar Shavan today convened the meeting of the concerned officers to ensure more transparency and an effective criminal justice delivery system in the district.

At the outset, the Chief Prosecuting Officer apprised the meeting about several issues like lack of DDP office building, residential quarters for the Public Prosecutors and other related issues for the smooth functioning of the court complex Rajouri. He further gave the outline of the duties and responsibilities entrusted to the wing.

During the meeting, the District Magistrate sought a detailed report from the concerned officers about the case-wise details of different departments including OSC, CWC, JJB who in turn briefed about the number of cases settled and the kind of services provided to the victims.

Regarding the awareness campaigns about the child protection act, the PO ICDS informed the meeting that massive awareness programmes are being organised by the CDPOs in the areas of their respective jurisdictions to disseminate necessary awareness among the common masses about the Act.

He said that since the last meeting, substantial progress has been made.

While addressing the participants, the District Magistrate said, a Public Prosecutor represents the State in whose name the prosecution is conducted and the wing has to ensure that offenders are convicted and meanwhile to make sure that no innocent is trapped in Legal wrangles.

He said the purpose of a criminal trial is to investigate the offence and to determine the guilt or the innocence of the accused and a Public Prosecutor must aid the court in discovering the truth of the case. He said that the DM has been entrusted to ensure that the sovereign functions of the state are performed at the district level in a right manner.

The District Magistrate said that interdepartmental coordination and an integrated approach is a must for the proper legislation and delivery of the justice.

He impressed upon the officers to put in arduous efforts for increasing the conviction rates of the cases.

The District Magistrate also assured full support to the prosecutors both on logistics and working fronts and assured that he will try his best to facilitate them in the discharge of their legitimate duties.