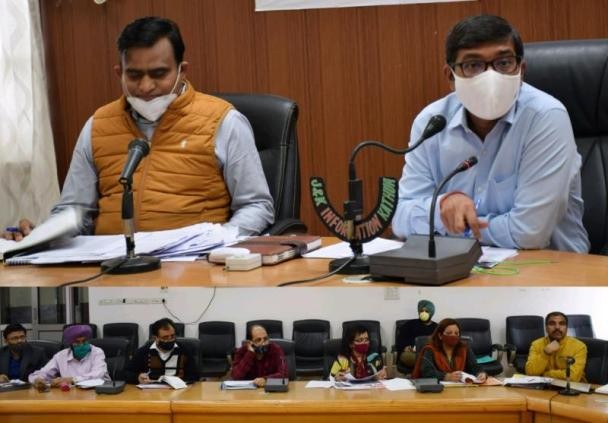 KATHUA, MARCH 23: District Development Commissioner, Kathua, Rahul Yadav today held a meeting of officers to review the progress on works undertaken by line departments under District Capex plan, Centrally Sponsored Schemes and Back to Village programme in the district.

While taking review of the progress under the Health department, the DC laid stress on expediting the registration of beneficiaries under Ayushmaan Bharat-Sehat scheme. He asked for organising special camps at block levels with the involvement of elected representatives, prominent citizens etc to achieve the targets.

The DC called upon the concerned departments to speed up the Adhaar Seeding process and link the accounts of beneficiaries of MGNREGA, PMAGY, PM KISAN, Ration card etc besides beneficiaries of pension and scholarship under different schemes of the government.

While taking review of schemes undertaken by PWD department, the DC directed XEN PWD to expedite the works. He also directed for the timely completion of key projects including Billawar- Sukrala Mata road link, Bhini road, GMC Kathua and building of GDC Bani.

Taking strong note of slow process of tendering of B2V works, the DDC directed the concerned officer to complete the process by 27th March and ensure the completion within given timeframe.

He also passed directions to ICDS and School Education department to speed up the Adhaar Enrollment drives especially in isolated areas of the district.

The Deputy Commissioner also reviewed progress on projects of Jal Jeevan Mission, PMAY houses, MGNREGA works and PMGSY roads etc. He asked the departments to make all out efforts and press in adequate men and machinery to achieve the targets.