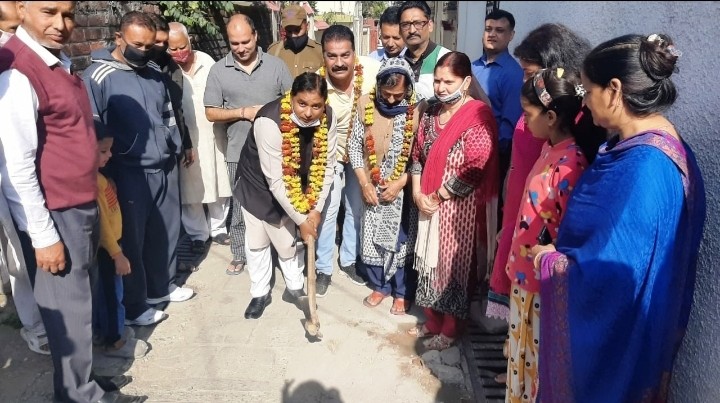 The works will be done under the supervision of JMC at an estimated cost of Rupees 22.64 lakhs and the funds were sanctioned to the local Corporator for taking up developmental works in his ward.

Speaking on the occasion, Sat Sharma said that for the first time ever in the history of J&K, such type of development is taking place and it is all due to the efforts of PM Narendra Modi who is very much concerned about the development in all spheres of UT and from time to time, Centre has been allocating funds especially for J&K so that development could persist in all areas. He also lauded the efforts of the local Corporator for taking up the pending works in the ward which has provided best infra to the masses at their doorsteps. He stated that development was done and is being done with respect to cover all polling booths in Jammu West Assembly segment and the main motto behind all this is that development should reach up to grass root level so that nobody is deprived of the basic amenities. He also stated that besides development, benefits of Central sponsored schemes were provided to thousands of people and he claimed that Jammu West is the only Constituency in J&K where maximum have availed benefits of many schemes of the Modi Government.

Mankotia said that from time to time the help of Former MLA Sat Sharma is sought which has helped in taking up many works of utmost importance in the ward. He said Ward 26 is equipped with every type of infra and pending works will also be taken up in stipulated time frame so that public distress could be avoided. He also appealed masses to keep their surroundings neat and clean so that “Swach Bharat Mission” initiated by PM Modi could be achieved.