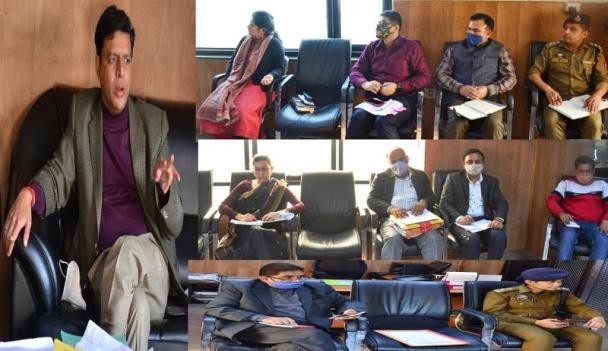 JAMMU, FEBRUARY 23: Divisional Commissioner, Sanjeev Verma today held a meeting of all the concerned departments to discuss measures for decongestion of areas around newly developed Parking at General Bus stand.

The Divisional Commissioner asked the concerned officers to notify No parking zones and ensure decongestion of the areas for smooth flow of traffic in the city. He also asked officers to motivate General public to use car parking at General bus stand as it has been thrown open for public and avoid parking at markets and roads around bus stand area.

Meanwhile, members of Raghunath Bazar Association called on the Div Com and apprised him about the problems being faced by shop keepers. The meeting had threadbare discussions on issuance of passes, rates of per day parking and other important issues. The Divisional Commissioner directed the VC JDA to issue passes to shop keepers and look into the issues raised by the Association. Earlier, the Divisional Commissioner convened a video conference meeting with all the Deputy Commissioners of Jammu division to review the implementation of court directions in a PIL title Save Animal Value Environment (SAVE).

The Meeting was attended by officers of JMC, Animal Husbandry and other concerned while Deputy Commissioners of Jammu division attended the meeting through video conferencing. The Deputy Commissioners apprised the Divisional Commissioner about the initiatives taken for welfare of animals in their respective districts and also informed about the activities. It was informed in the meeting that the district administrations have been identified land for cow sheds (Goushalas) and in most of the districts the same has been transferred to the concerned departments for establishment of cowsheds.

It was also informed that societies for the prevention of cruelty against animals (SPCA) and Quick response teams have been constituted in all the districts, while the helpline numbers have also been notified.

The Deputy Commissioners also informed that the injured animals are being rescued for the treatment in all the districts. The Divisional Commissioner asked the DCs to send updated list of activities being done by their respective districts.

The Divisional Commissioner also directed the DCs to share the list of Auditoriums, theaters, conference halls available in the districts with adequate facilities which could be used for screening of short films/ documentaries.