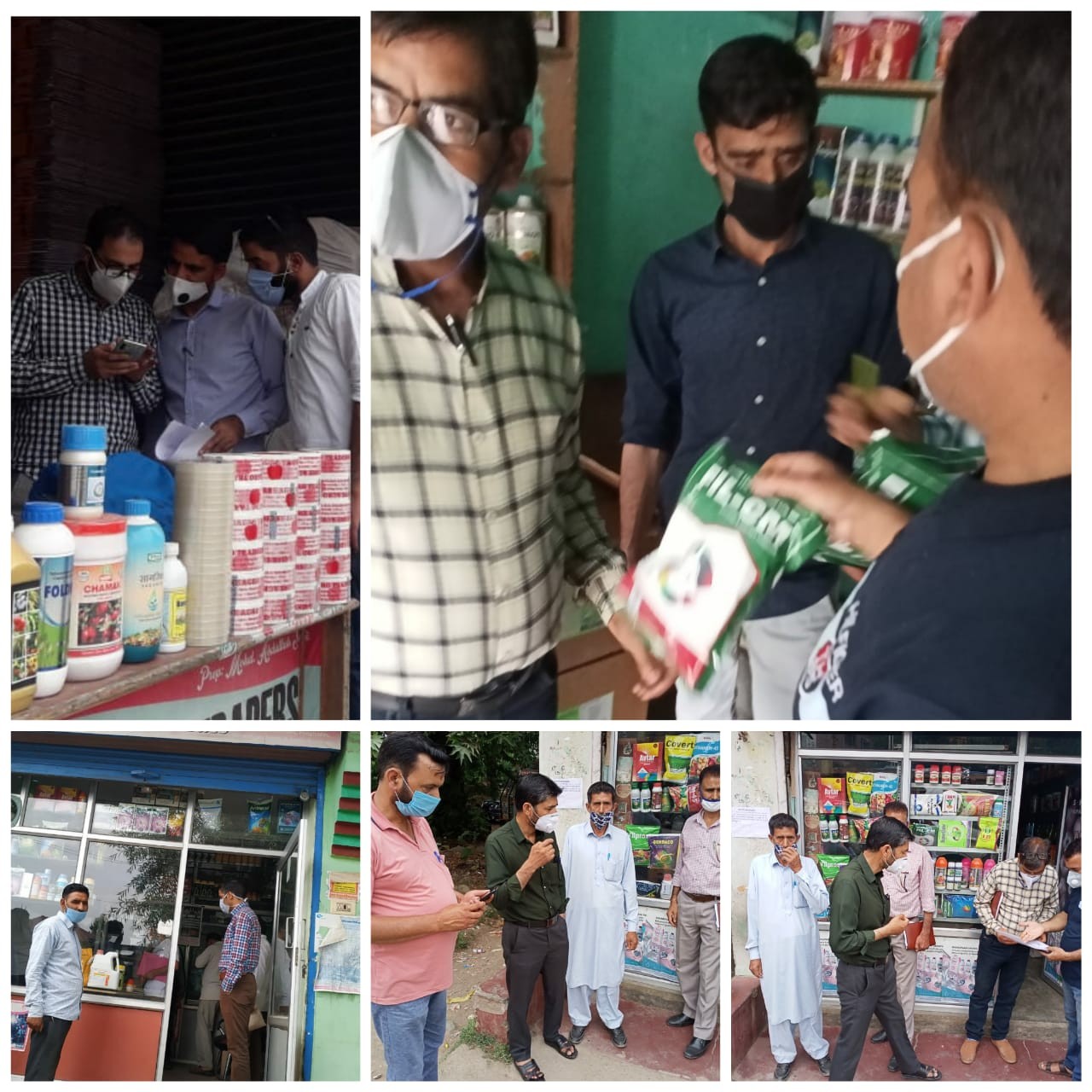 Pulwama July 30: In view of rampant complaints regarding the sale and stock of misbranded, spurious and sub standard pesticides, insecticides and fertilizers in the district; various teams led by concerned Tehsildars carried out comprehensive drive against the erring Pesticides & Fertilizer dealers across the district. During the drive, constituted teams raided various stores and outlets and lifted 46 samples of Pesticides /insecticides and 20 samples of fertilisers. It was noticed that various dealers were found violating the norms of Insecticides Act, 1968 & Fertilizer Control Order, 1985 like lack of proper maintainance of sale and stock registers, sale of Insecticides /Pesticides, fertilisers outside the purview of license/ principle certification, lack of display of rate list, invalidity of licences, lack of availability of invoices of purchases made from manufacturer/main supplier, lack of details regarding batch no, CRM no etc. were also found during the inspection. During the inspections, fine of Rs 14200 was immediately realized from erring dealers whereas 04 outlets were sealed on spot. As per the report submitted by Assistant Controller Legal Metrology many products were having labelling norms violations like lack of mention of manufacturing date, Batch No. MRP, and date of packing etc. While taking cognizance of the complaints regarding Sale of Substandard /Spurious Pesticides, Insecticides and Fertilisers raised by various farmer groups during the visit of Hon’ble Lt Governor on 11.07.2020; Deputy Commissioner Pulwama Dr Raghav Langer said that District Administration constituted many teams comprising of Tehsildars, District Officer Law Enforcement Wing of Agriculture Production Department, Pesticides Officer, HDOs, SDAO's, Assistant Controller Legal Metrology across the district to curb the menace of sale and supply of Substandard /Spurious Pesticides, Insecticides and Fertilisers in the district. The teams carried out surprise inspections on various stores and outlets in all 08 tehsils of the district and found sheer violation of Insecticides Act & FCO by pesticides/fertilizer dealers and license holders. DC remarked that the rampant violation of Insecticides rules, 1971 in the district noticed during the surprise inspections, point towards lack of regular monitoring and inspections by the officials of Law enforcement wing of Agriculture Production Department. A report in this regard shall be submitted to the Government. He instructed concerned officers to send samples to the designated laboratory at Srinagar and CIL Faridabad for analysis along with launching of prosecution against the dealers for the violations of the Act.