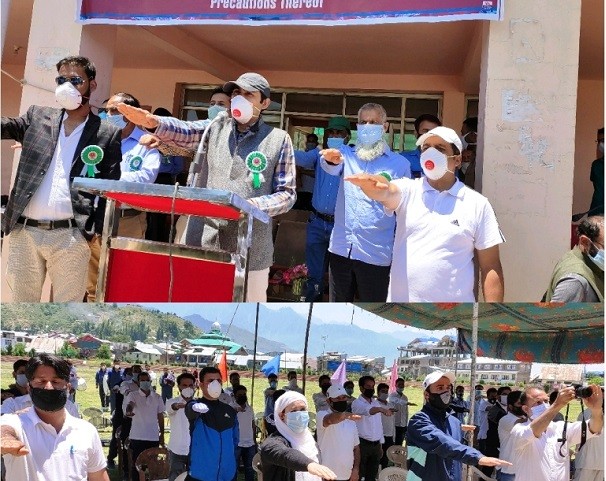 BANDIPORA, JUNE 16: Deputy Commissioner Bandipora, Ravinder Kumar Tuesday hailed the role played by youth in the district to deal with the crisis arisen due to COVID19 pandemic.

While interacting with a group of youth in Sports Stadium Bandipora as part of awareness campaign launched by the admin, DC Bandipora said the youth showed exemplary courage during the testing times by standing up against the crisis and lending their helping hand to the needy people amid lockdown.

Ravinder Kumar said that as the restrictions have been eased out, the role of youth is more significant as they can act as ambassadors to motivate the people to adopt precautions.

During the awareness program, youth icons of the district including world kick-boxing champion Tajamul-Islam, Sqay Martial artist Shah Parihaan Peerzada, Rockstar Babar Mudasir besides others interacted with the officers of the district administration and assured their support to the administration in creating awareness among the people regarding COVID19 through different mediums.

The DC said that with gradual ease in lockdown restrictions, an urgent need has arisen for sustained awareness efforts on COVID-19 with the community participation at grassroots level in the district, as a precautionary measure for prevention of Community Transmission of COVID-19.