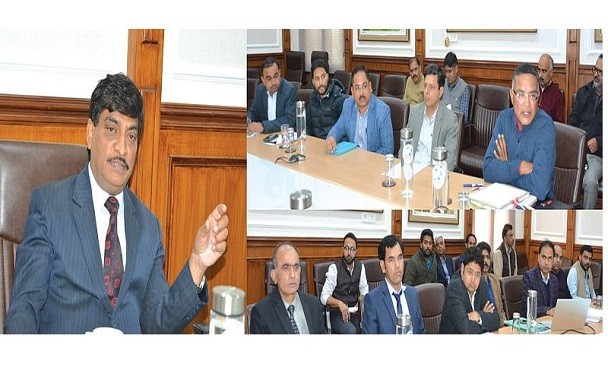 Jammu, Nov 28: Chief Secretary, Dr Arun Kumar Mehta today held that the deliverables regarding the R&B Department should be adhered to and the road projects interconnecting the two divisions of the UT expedited for all weather smooth connectivity.

Dr Mehta impressed upon the officers to complete the Semi-Ring Road for Jammu up to March next year and explore the possibility of Ring-Road around the city for the easement of commuters. He asked them to prepare a DPR for the same.

The Chief Secretary also stressed on the officers to prepare a DPR for Kathua-Bani-Sarthal-Bhadarwah-Doda Road without any delay. He told them that it is of great significance with respect to giving boost to tourism in these areas.

He directed for connecting it with both Jammu-Srinagar Highway and Sinthan-Kishtwar Road for its maximum utility. He told them that the condition of Sinthan-Kishtwar and Sonamarg Road should be maintained constantly.

He called for keeping ready the men and machinery for snow clearance of these roads for their least blocking during winters.

He also made out that the Delhi-Katra Expressway corridor to have an interchange with the Srinagar-Jammu Highway so that people traveling on this Expressway could come out to this highway for proceeding towards Srinagar.

Dr Mehta asked the authorities to improve the overall road surface of the Jammu-Srinagar National Highway so that travel time is reduced to maximum of 8 hours.

He told them to declare the stretches of Jawahar Tunnel and Patnitop as part of National Highway so that these are maintained effectively.