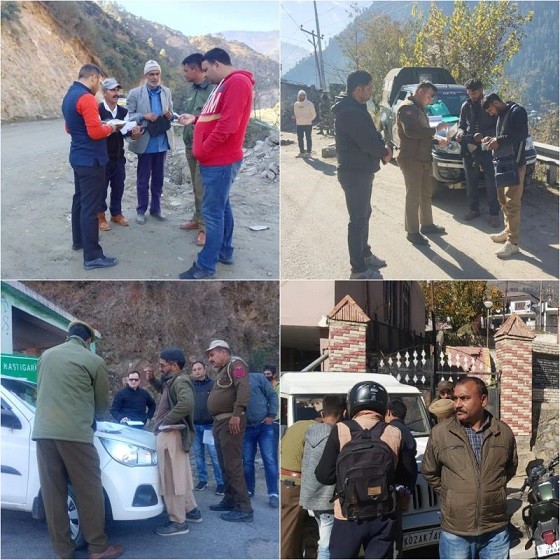 DODA, NOVEMBER 26: District Administration Doda, in continuation of its efforts to minimise road accidents, and to address the complaints received from the general public, conducted a surprise checking drive of vehicles on all the roads across the district.

As per the enforcement departments, the checking drive, launched under the supervision of Deputy Commissioner Vishesh Paul Mahajan, has been launched to rein in the violators ahead of the winter season, during which most of the roads become slippery posing risk to the commuters.

“Major thrust of today’s checking was to check cell phone use while driving; Triple riding; Riding two wheels without helmet; Rash driving; Out of route driving by commercial vehicles; Plying without proper papers and Driving licences. All the ADMs, SDMs, SDPOs,

Tehsildars, SHOs and officers and officials of MVD conducted the surprise checking on NH244 and on all internal roads of the district.

A total of 554 vehicles were checked, 119 Challaned and 4 others were seized during the day-long drive.

The officers also conducted counselling of drivers en-route and sensitised them about safe speed and road safety. They also took stock of the nuisance of wrong parking, and roadside encroachments.

The DC Doda said that no one would be allowed to play with the lives of innocent commuters.

He said that the checking will be made a routine henceforth and all the SDMs, Tehsildars, Police officers have been instructed to ensure random checking and strict enforcement while dealing with the traffic rules violators.

He said the MVD has been asked to ensure proper fitness of passenger vehicles. He asked the authorities to take strict action against wrong parking and roadside encroachments.

He also directed the authorities to ensure 100% installation of Speed Governors and GPS on commercial vehicles.

He directed the Traffic Police, MVD, Police, and Revenue authorities to work in close coordination and act tough against traffic rules violators, who cause a lot of inconvenience to common people.

He directed the officers to devise an effective mechanism for better traffic regulation especially during winter when most of our roads become slippery and icy.

The DM appealed stakeholders to use civic sense and driving sense for imperative and better traffic management.