Jammu, No 23: LG has given a statement the " DELAY IN PUBLIC WORKS" is severe corruption than financial corruption.

However, Jammu Development Authority is notorious in such kind of issues of delay tactics.

However, one  case  of incompetance/lack of knowlege/ deriliction of duties/delay in public work/harassment can be proved from rejection of a building permission by VC vide No. 1039-41 dated: 21.2.2021 thereafter observations of CTP, Town Planning Organization Jammu by countering the JDA's illegal rejection vide his letter No. 1774 dated 09.03.2022 & thereafter sleeping by VC over  seeking clarification of no mention of Bye Laws of said building in Master Plan from Govt.

However,  Pr Secretary, H&UDD on 18th September directed VC/CTP in his office chambers to write clarification to applicant in a weeks time as new issue was projected by both bosses over the said permission but did not provide to applicant following which complaint was filed to Pr Secretary as VC refused to provide the copy.

Pr secretary, in turn vide letter dated. 27th October directed VC to furnish reply along with previous comunications,  but the boss VC JDA not bothered to act  till day, speaks of his open supermacy over Govt/deriliction of duties because if Pr Secretarty not bothered by him, how the boss would have bothering general public.

After not getting response from the VC JDA, a reminder has been issued by Govt again vide letter dated.22.11.2022 & VC has been asked to reply within two days, which are again over on today but the boss VC did not bother to repy speaks of work culture in JKUT.

It clealy speaks that how such officers of JKUT are working for public & how they are bothering top officer, speaks of work culture in J&K, however copies with CTN speak the truth. 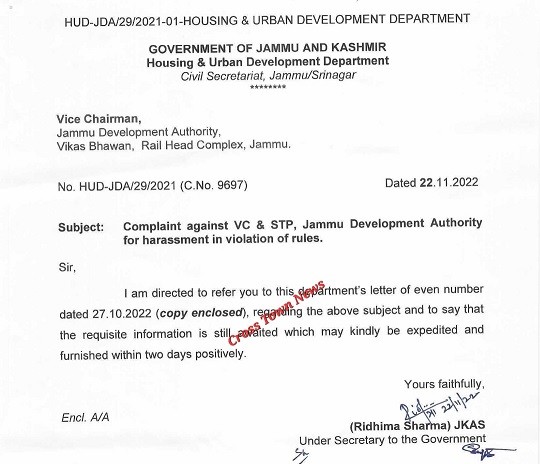 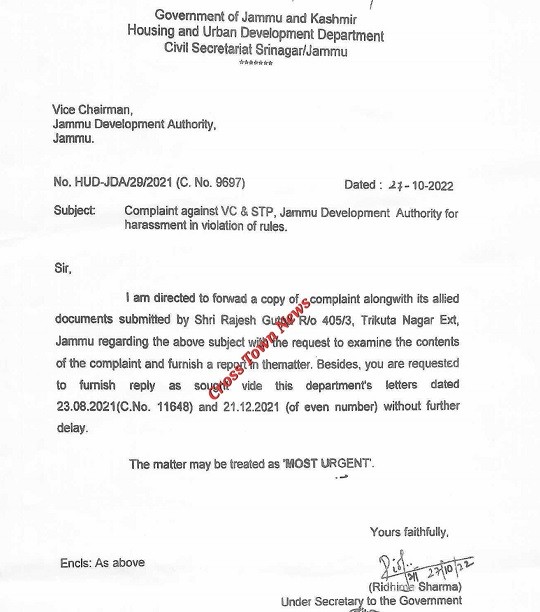