Jammu, Nov 22: It is well aware of the fact that one Iftikhar Ahmad had already worked as CTP, TPO, Jammu for a period of more than two years & used different yard sticks in  UTEIC in Jammu as compared to Srinagar for the best reasons known to him & as well as the matter was known to Pr Secretary, H&UDD.

However, enquiry  into the matter was called by then Div Com Jammu over the issue & CTP, TPO, Anil Raina reported to Div Com Jammu regarding the  illegality committed by the boss Iftikhar Ahmad  as CTP, TPO, Jammu for adopting different yard sticks in UTEIC in Jammu as compared to Srinagar.

It clearly speaks that there is no competant Officer available in J&K, who can run the undesired white elephant post/Department of CTP, TPO,  Jammu as some of  officers of TPO, Jammu have  been assigned additional charge as STP/Building Officers in JMC & as already Govt has appointed CTP/STPs in JDA/SDA/JMC/SMC & lot of others are waiting for their turn on higher posts despite being senior & due for the vacant posts.

However, order copy with CTN reads as:- 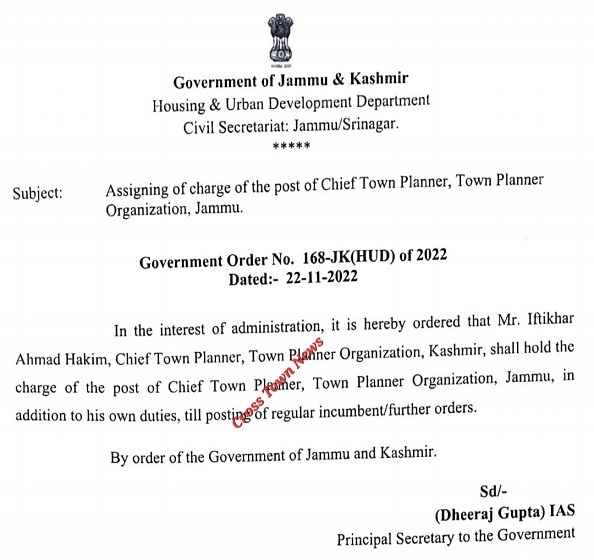