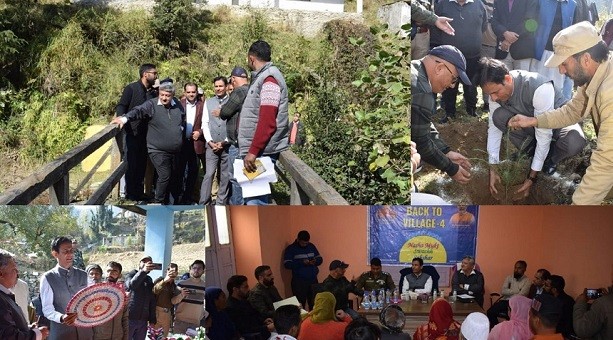 BHADERWAH, Nov 03: Principal Secretary, Power Development Department (PDD), H Rajesh Prasad, who was Visiting Officer for Chinote panchayat of Bhaderwah block under ambitious ‘Back to Village’ programme phase IV, performed multiple activities which witnessed huge public participation of all stakeholders. Prasad conducted special Gram Sabha at panchayat Ghar, Akhrot Bagh, Chinote and took stock of grievances and demands raised by the participants. He issued on spot directions to the concerned officers to prepare a Detailed Project Report for all feasible works projected by the people. Principal Secretary held Mahila Sabha and Bal Sabha at High School Mathola and interacted with women and children there.  He also distributed sports kits among the children. Prasad was accompanied by Deputy Commissioner, Doda, Vishesh Paul Mahajan, SSP Doda Abdul Qayoom, ADC Bhaderwah, Chowdhary Dil Mir, ACD, Doda, Phulail Singh and other officers. On the occasion, Prasad launched "Know your real Heroes", an initiative of district administration. Pertinently, "Know your real Heroes" is a special initiative of first of its kind in whole of the UT in which all the real heroes of Doda district who sacrificed their precious lives for our safety and security shall be honoured and introduced to our youth. Under the initiative, photographs of 150 martyr soldiers from army, paramilitary and JKP would be placed in every school of the district so that our young generation would know about the real heroes of the district. A cultural programme was also presented by the students of HS Mathola during the event. Principal Secretary, while interacting with media, reiterated that the main aim of ‘Back to Village’ programme is to bring administration at the doorsteps of the people living in far flung villages. He said that he shall take special care of the demands and aspirations of the area and try his best to ensure rapid growth and development of the area. While replying to queries, he informed that UT government is committed to improve the power and electricity supply ensuring 24×7 uninterrupted power supply to its consumers. In this regard, various schemes like RDSS have been launched to reduce the T&D losses. He appealed public to pay regular electric bills and take advantage of Amnesty Scheme clearing all pending dues before the scheme ends.