Home » News » National » Lack of development in J&K one of the reasons behind rise of terrorism in J&K: Rajnath Singh 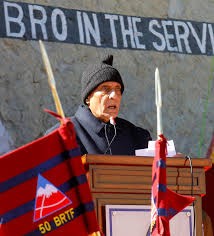 LEH,  Oct 28: The lack of infrastructure development in Jammu and Kashmir for decades post-independence was one of the reasons behind the rise of terrorism in the union territory, defence minister Rajnath Singh said as he dedicated to the nation 75 infrastructure projects built by the Border Roads Organisation (BRO) in Ladakh on Friday.

45 bridges, 27 roads, two helipads and one carbon-neutral habitat– are spread across six states and two UTs. Twenty of these projects are in Jammu and Kashmir (J&K), 18 each in Ladakh and Arunachal Pradesh, five in Uttarakhand and 14 in other border states of Sikkim, Himachal Pradesh, Punjab and Rajasthan.