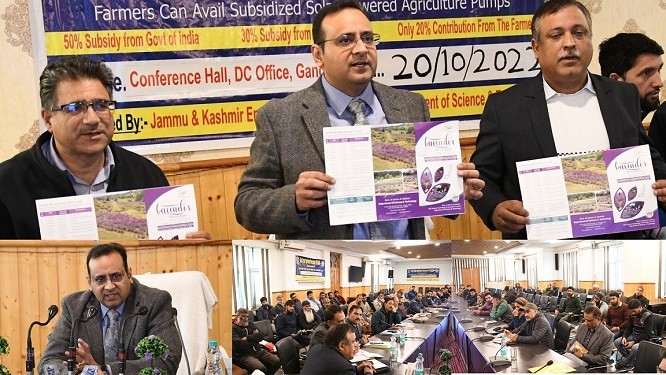 GANDERBAL, Oct20: The Jammu and Kashmir Energy Development Agency (JAKEDA), Department of Science and Technology, today conducted an awareness programme to sensitize the farmers regarding installation of Solar Powered Agriculture Pumps in Ganderbal district. Commissioner Secretary, Science & Technology, Saurabh Bhagat, chaired the event. Chief Executive Officer, JAKEDA, Dr. P R Dhar, Additional Director, J&K Science and Technology Innovation Council, Dr. Nasir Ahmed Shah, Executive Engineer, JAKEDA, Mohammad Yousuf Bhat, Deputy CEO JAKEDA, Muzafar Ahmad Malik, Regional Head JAKEDA, Rabia Noor besides Chief Horticulture Officer, Ganderbal, Chief Agriculture Officer, Ganderbal and other district officers attended the programme. Speaking on the occasion, Commissioner Secretary highlighted various benefits and incentives being extended by the Union Ministry of New and Renewable Energy under Prime Minister Kisan Urja Suraksha Evam Uthaan Mahabhiyan (PM-KUSUM) scheme, which is primarily meant for uplift of farmers. He urged upon the farmer community to avail benefit of the scheme which is only government scheme with 80 percent subsidy. He also highlighted the initiative of J&K Science Technology and Innovation Council with respect to establishment of Demonstration Farms of Aroma Cash Crops in the UT. He suggested the farmers to start cultivation of such aroma crash crops like Lavender, Rose, Salvia, Mint and other high value aromatic and medicinal crops. During awareness program, it was informed that the PM-KUSUM scheme has broadly two main components. Under Component “B”, the Diesel Powered Pumps could be replaced by solar pumps and new pumps could also be installed in no-grid areas under decentralized application while under Component “C”, electrical pumps could be replaced with  Solar Powered Pumps by the farmers. The scheme allows the farmers to install subsidized Solar Powered Pumps up to 10 HP capacity for irrigation purpose. Under both the categories, the Ministry provides a subsidy of 50% of the cost of the pump, 30% of the cost is being provided by the government of J&K and the beneficiary has to bear only 20% cost of the pump. The scheme also allows installation of cluster based irrigation pumps up to 10HP capacity by Water User Associations. Later, Commissioner Secretary also launched brochures on PM-KUSUM and Lavender Revolution in Jammu and Kashmir.