Jammu, Sep 26; It is a well aware of the fact one Jagdish Hans, STP, JDA is harassing innocents by using different yardsticks as compared to JMC, which were published with proof.

Pertinent to mention here that on 18th of August 2022 Pr Secretary, H&UDD along with his VC, JDA discussed the issue of rejection of one building permission, which STP could not justify & thereafter they told that the said plot is coming in a new proposed road but Pr Secretary directed to decide the issue within a weeks time.

Now, one can see the working in J&K Govt that today 36 days are over but the boss STP had not disposed the case with what soever new proposal.

Now, one more issue of his lack of knowledge/deriliction of duties/ malafidies can be seen from his disposal in Grievance Cell is no doubt a matter of enquiry by some technically competant officers as per his observations, observations of CTP, TPO & directions issued by Pr Secretary over the observations of CTP, TPO shall crackdown harassment scam by Jagdish Hans, STP, JDA, who is being placed as CTP, TPO on Ist of October, 2022.

However, his disposal, copy with CTN speaks the facts as under:- 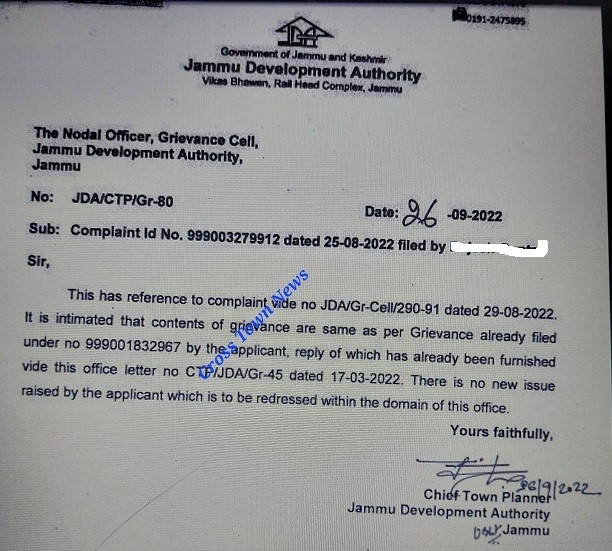