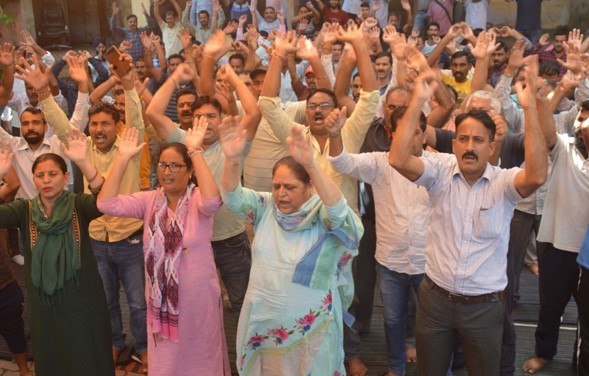 Jammu, September 17: PHE workers/daily wagers’ protest dharna and strike continued on the 87th consecutive day today outside the office of Chief Engineer PHE Jammu and other Divisional and Sub-Divisional headquarters.

Pertinent to mention here that these Jal Shakti/PHE workers are on strike since June 22, 2022 and demanding release of their pending wages and regularization of their services.

Despite three rounds of talks with higher authorities in the Department, their dialogue remained inconclusive but the Jal Shakti bosses continue to enjoy Govt's AC office/accomodation/vehicle on public taxes, which raised a question on their working & integrity?

Protestors were shouting slogans in support of their demands and also against LG’s Administration, BJP and other higher authorities in the J&K UT.

These helpless workers are demanding regularization, enhancement of Minimum Wages as per Central norms in J&K UT and release of pending wages of 70 months of PHE workers.