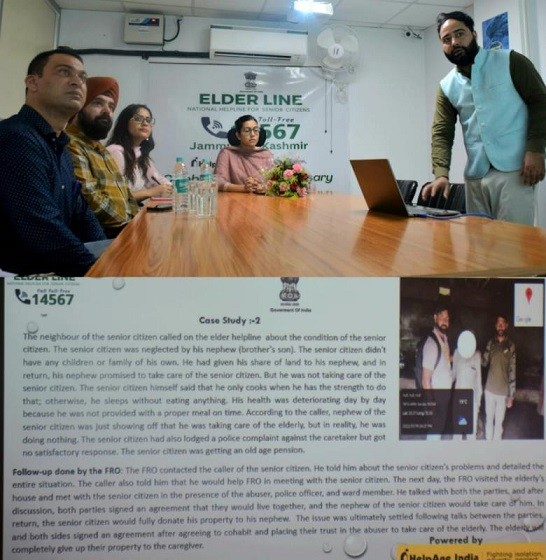 Program Manager, Elderline J&K, Subzar Ahmad Parry gave a powerpoint presentation and also highlighted the achievements recorded by the Elderline in one year.

He apprised the DC that the Ministry of Social Justice and Empowerment (GOI) decided to start a helpline for senior citizens with an aim to attend to their complaints and their speedy redressal.

Regarding performance in the last one year, the Manager informed that the Elderline received 23152 calls out of which 9604 were actionable and in 3541 cases the elderly were served.

He also said that the Elderline provides the assistance regarding health, legal, emotional support, rescue, elderly care and other care services with the help of respective stakeholders.

District Social Welfare Officer Jammu, Mamta Rajput also briefed the participants about the program. Some members of the senior citizen associations and senior officials from the Social Welfare Department were present during the program.

The Deputy Commissioner also shared her thoughts on the Elderline concept and discussed major issues faced by elder people in today's scenario.

She also appreciated the works done so far by Elderline and asked them to find more innovative ideas to provide assistance to the senior citizens.

The office bearers of Elderline honoured the Deputy Commissioner by presenting a momento.