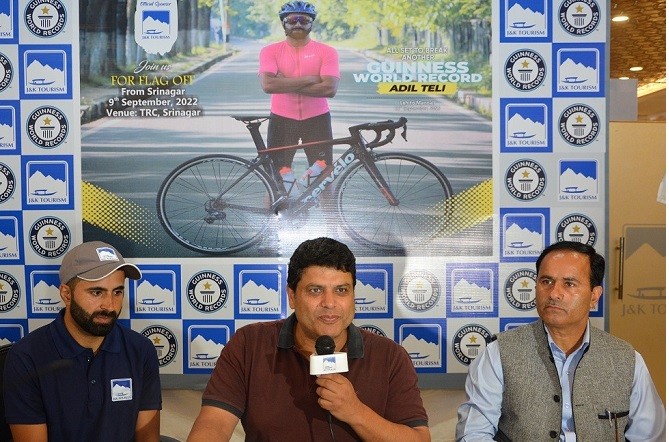 SRINAGAR, Sep 09: Secretary Tourism and Youth Services & Sports, Sarmad Hafeez flagged off Leh to the Manali cycle yatra of cyclist Adil Teli from TRC here today morning. Prior to the flagging off, while addressing a press conference flanked by cyclist Adil Teli and Director Tourism Kashmir, Dr GN Itoo, Hafeez said that Jammu and Kashmir has produced champion cyclists who have excelled in sports and have done great in this field. Hafeez said that Adil is attempting to pedal for the Leh to Manali circuit on Friday morning in around 30 hours. The Leh to Manali circuit is a high altitude area for cyclists. The current Guinness Record for the distance is 34 hours and 54 minutes. He said Teli is eyeing the world record and would attempt to finish the circuit in 30 hours. He said sports persons like Teli are inspirations to thousands of cyclists from the country. He said J&K has a huge potential for cycling as it suits for mountain biking and cycling alike and the government is supporting in this endeavour to the cyclists like Teli. The Tourism Secretary added that the government is reviving old cycling and mountain biking routes besides other destinations in south Kashmir like Verinag, Achabal, Sinthan pass. On the occasion, he congratulated Teli for eyeing to create another Guinness World Record and added that the feat would definitely bring more laurels to the UT as well as the country. Director Tourism Kashmir, Dr GN Itoo also extended his wishes to Teli and hailed his previous record of cycling from Kashmir to Kanyakumari. Adil had last year set a Guinness World Record for covering Kashmir to Kanyakumari in ‘8 days, 1 hour and 39 minutes’.