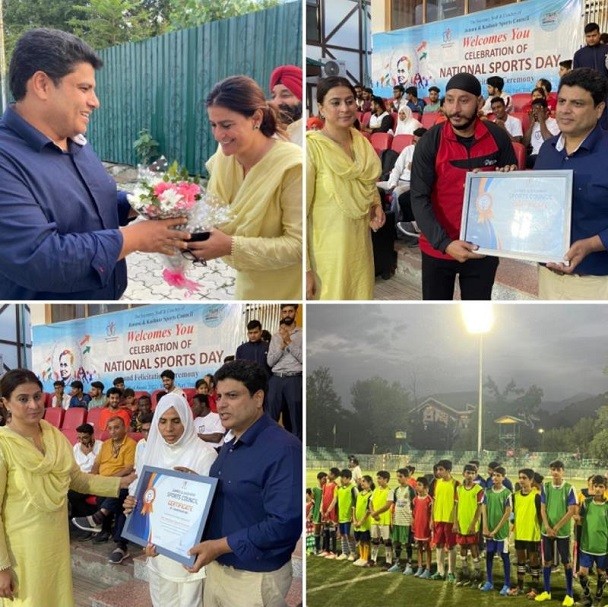 Secretary Youth Services & Sports Department, Sarmad Hafeez presided over the function as chief guest at TRF Football Turf here. While addressing an event to commemorate the hockey icon on his birthday which is celebrated as National Sports Day, Hafeez said, "National sports day is being celebrated all across the country today and various sporting events are being organized.

He told that both at Divisional and Panchayat levels players are participating in the sports day celebration events and all the sports promoters of the ‘My Youth My Pride’ sports program are being felicitated here today.

While paying the glowing tributes to the legend, Hafeez reiterated that government would leave no stone unturned to take sports to the apex of the sports map of the country and all necessary steps will be taken to achieve the goal.

Secretary of J&K Sports Council, Nuzhat Gull said that several events were organized across the Union Territory to pay glowing tribute to the legend and the “wizard” of Indian Hockey, Major Dhyan Chand who lives in the heart of every sportsperson of the country.

She said that on this day we must all take pledge to promote sports that inculcate discipline, ethics, and values in the young generation and help our country reach greater heights.

She also highlighted the role of sports in the upliftment of the youth and its associated benefits to the society and country at large.

A large number of players from various games were present on the occasion who witnessed hockey and football matches.

Apart from guests many former players and officers and officials from J&K Sports Council were also present on the occasion. On the occasion several sports promoters, including journalists and foreign players were also felicitated.