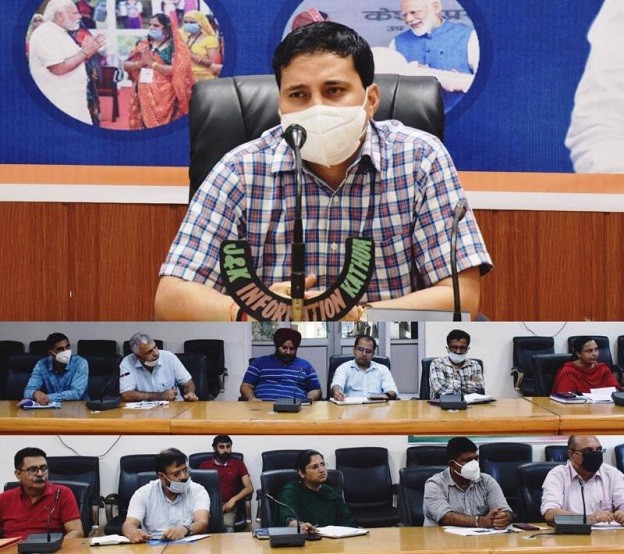 The DC took a comprehensive review of the implementation of schemes, programmes and services of these departments. He directed the officers to adopt a proactive approach to extend the benefits of the schemes to the targeted lot in an effective and transparent manner.

While reviewing the implementation of Fire safety measures, the DC directed for conducting fire audits of all the important establishments across the district, while calling for making the District's fire profile based on vulnerability to fire incidents. He also called for organising awareness camps to sensitize the public about the preventive measures against fire incidents.

The Labour Department was directed to conduct an exercise in coordination with the Rural Development Department for registration of un-organised workers on e-shram besides covering all eligible persons under welfare schemes of Jammu & Kashmir Building and other Construction Workers Welfare Board (JKBOCWWB).

The Drug Control department was directed to conduct random inspections to keep check on sale of spurious drugs. The Department of Food Safety was asked to conduct frequent market checking to check food adulteration and hygiene.

He also called for enforcing hygiene protocol ratings. Legal Metrology was directed to enforce display of rate lists, quantity and composition of products so as to benefit the consumers.

PCB Kathua was directed to conduct an enforcement drive in the district to eliminate Single Use Plastic (SUP) from the market, besides sensitising the public to switch to eco-friendly alternatives.

While reviewing the transport sector, the DC directed RTO Kathua to take measures to provide transport connectivity to uncovered areas of the district.

The DC directed DMO Kathua to keep a strict vigil on illegal mining and also work in close coordination with Police to thwart any attempt of illegal mining in the district.