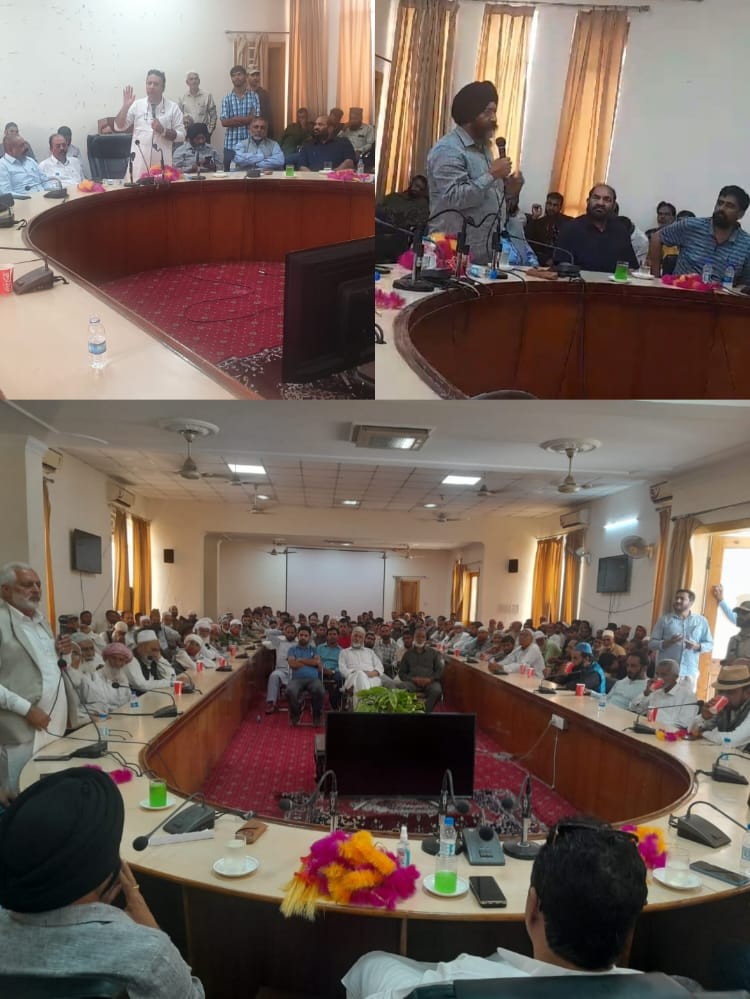 RAJOURI, July 23:One day workers convention of Apni Party was held at Rajouri in which Vice President and Former Cabinet Minister, Choudhary Zulfikar Ali urged the Government of India to hold early assembly elections in the Union Territory of Jammu and Kashmir to finish the disconnect between the people, common masses and the administration. Addressing the workers convention, Zulfikar Ali stated that there is no alternative to an elected Government in a democracy.

He further said that it’s a blot on the system to deprive a large section of society from the electoral process and having a Government of their choice. He also demanded that the Statehood be restored before holding the assembly elections in the State as this was the commitment made by the Union Home Minister to the Parliament of India on August 5, 2019. He further stated that the people are facing lots of inconvenience due to non-availability of an elected Government as they have no access to the corridors of power.

“The people are facing hardships due to the slow pace of developmental works in the district.” He said and urged upon the LG Administration to provide adequate relief and compensation to the sufferers of the recent heavy rainfall in the district and flash flood due to which a large number of houses have been damaged and the land worth several crores has been eroded. He demanded a special survey be conducted for the losses incurred during the heavy rainfall in the District. He also expressed concern over the exaggerated power bills to the people and demanded the pace of the development of the work in the district be enhanced so that the miseries can be redressed. He also demanded the restoration of infrastructure which was damaged during the recent floods triggered by rainfall and further demanded the major prestigious which were under execution in the district including Anas irrigation canal, Govt Degree College Kotranka, Eco-Tourism Park Kandi, Amusement Park Kotranka, Kotranka – Khawas Road, Budhal – Shopian Road and several other minor and major projects be started as these works have been stopped from the last two – three years.

In this meeting, the Provincial President, Jammu and Former Minister, Manjit Singh assured the people that if the Apni Party comes to power, the people will be provided 500 units of electricity free of cost during summer season in Jammu province and 300 units in winter season. Similarly, he said that they will provide 500 units of free electricity to the people of Kashmir during winter and in summers; they will get 300 units of electricity. He also said that the Party has decided under the leadership of Altaf Bukhari sahab to enhance the old age pension / widow pension up to Rs 5000. He also stated that the Apni Party has decided to provide 4 LPG cooking gas cylinders to the poor people in the Union Territory in a year. He also said that Apni Party was formed to safeguard the interest of the people of the erstwhile State and to defend the basic rights, land rights, employment etc and the demography of J&K will not be changed at any cost. He said that the Party will leave no stone unturned for the upliftment of the weaker section of the society. Among others, the convention was also attended by Provincial Vice President Jammu, Ex-MLA Faqir Nath, Ex-MLA Rajouri Choudhary Qamar Hussain, Additional General Secretary, Arun Chibber, Provincial Secretary, Dr Rohit Gupta, President, Apni Trade Union, Ajaz Kazmi, District President Rajouri, Syed Manzoor Hussain Shah, Provincial President Jammu Youth Wing, Vipul Bali, senior leader Fazal Chahun, Munishi Alam Din, Block Development Council Chairperson, Shamim Akhtar, Senior Party Choudhary Jamshed, Youth Leader, Surjeet Singh and others.