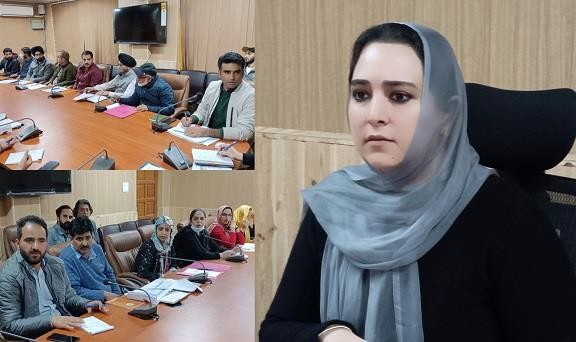 During the meeting, the DDC was apprised through Power Point Presentation with regard to the progress achieved under different schemes viz PMEGP, REGP, MUMKIN, SAHYTA, ISDS, MUDRA among others.

While taking a comprehensive and scheme wise review, the DDC emphasized to explore every possibility for achieving the desired results. She directed to maintain a close liaison with each other so that the beneficiaries may not face any inconvenience.

Dr Sehrish exhorted to ensure the achievement of 100 percent target well within the stipulated time frame.

She also stressed to provide the services in a smooth and hassle free manner and making the process easy so that the welfare schemes are availed by the eligible beneficiaries.

She also exhorted upon the concerned departments to disseminate awareness among the masses through different means so that more and more beneficiaries are covered under such welfare schemes.

During the meeting, the DDC directed AD employment to give a detailed chart of awareness activities for each month to make people aware about various employment generation scheme. Meanwhile, the meeting was informed that a total of 3984 applications under various welfare schemes including PMEGP, MUMKIN, JKREGP, SAHYTA, ISDS etc were received by various departments from the applicants upto the current month wherein about 1950 cases were sanctioned by the banks and remainng cases are under process.

Moreover, in order to make bussiness units more exclusive and profitable, the DDC laid emphasis on real time monitoring of units to be established under various welfare schemes being implemented.

Highlighting the role of SAHYTA scheme, the DDC stressed that employement generation for those eligible persons belonging to distressed families under this schemes shall play a significant role.