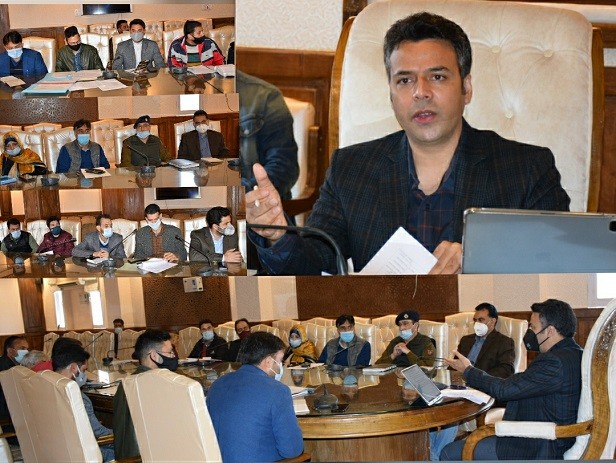 The DC also reviewed the achievements under the targeted Developmental deliverables, besides estimation, tendering and allotment status of all works including DDC/ BDC/PRI grants on the occasion.

During the meeting, through a powerpoint presentation ACD, Mohammad Imran Khan informed the chair that under District Capex 2022-23 there are a total of 1657 works, out of which an estimation process of 1400 works stands completed whereas 79 works have been allotted with administrative approval given to 1352 works.

It was also given out that under MGNREGA there are 7049 total works in the district for the year 2022-23. The DC directed the concerned to complete the estimation process of MGNREGA works within a week’s time.

He stressed to work in coordination and synergy to ensure smooth and speedy execution of works in all blocks.

He also directed the officers to start work on all allotted works immediately in all blocks and ensure timely completion of all work projects.

While reviewing the physical progress under 14th-FC, the chair was informed that there were 6616 approved works under 14th-FC and 6159 works were taken up and 5809 works were completed with a total fund release of 72 crore and expenditure of 64 crore.

During the meeting the DC also reviewed status of works of B2V and SBM and it was also informed that 52000 HHLs were constructed with an estimated cost of 65 crore in 11 blocks of district.