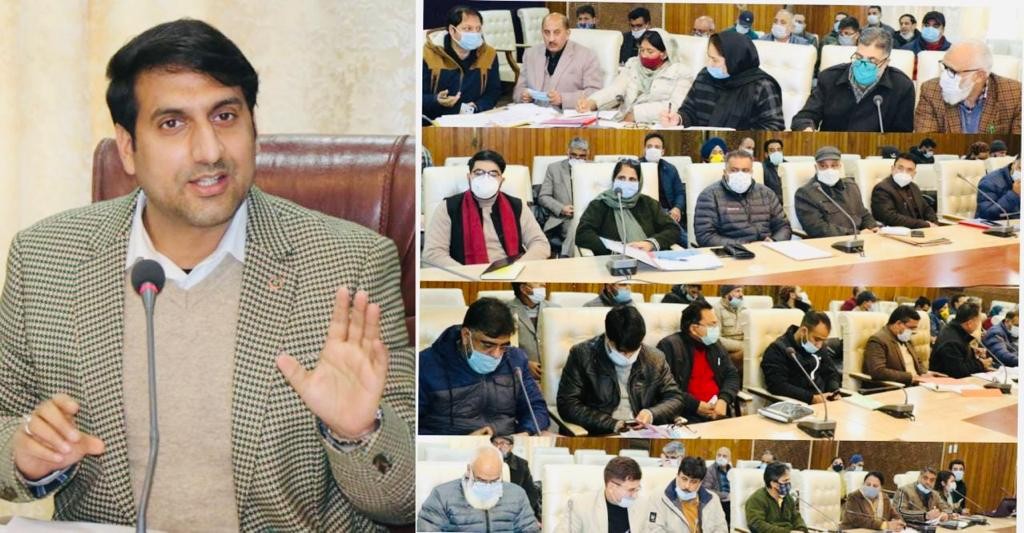 SRINAGAR, Nov  25:  The District Development Commissioner (DDC) Srinagar, Mohammad Aijaz Asad today chaired a meeting of all District/Sectoral Officers to review the status and progress of all developmental works and physical status of all approved projects targeted for completion in the current fiscal under the District Capex Plan, 2021-22. The meeting also held detailed deliberations with regard to progress achieved under different Social Welfare and Self-Employment schemes being carried out in the District. The District Development Commission took a detailed review of all works under each sector and directed the officers to ensure 100 percent target of physical execution of works is completed in set timelines so that people of the District are benefitted. The DDC took feedback from all concerned Officers regarding progress achieved under different sectors including PHE, PDD, R&B, Education, Health, MGNREGA, PMGSY, NRLM, Fisheries Handicrafts, YSS, Labour, Social Welfare, ICDS and other sectors. On the occasion, the DDC directed the officers to work in coordinated manner with line departments and with synergy to achieve development goals well in time keeping in view the limited working season and to cater to the developmental needs of the district with focus on creating tangible assets. DDC stressed on authorities to take all possible measures to accelerate the pace of ongoing works for their time-bound completion. He also cautioned that any kind of laxity in completing the works within the fixed time line will not be tolerated at all. He also exhorted for mobilizing men and machinery for completing the projects in stipulated time frame besides urged to ensure productive and fruitful utilization of the available resources. Earlier, the Chief Planning Officer, Srinagar gave a detailed PowerPoint presentation and informed that out of total 425 works taken up during current fiscal,  administrative approval has been granted all the works and tendering process of all works has been completed. He also highlighted the achievements made under different sectors including PHE, PDD, R&B, Education, Health, MGNREGA, NRLM, Social Welfare, ICDS and other sectors. While reviewing the power scenario in the District, the DDC asked the concerned authorities to ensure uninterrupted power supply to the consumers as per notified schedule so that people do not face any inconvenience for want of electricity particularly during the ensuing winter season. The DDC also stressed on keeping an adequate buffer of transformers to meet any exigency across the district. He also emphasised to ensure timely replacements/repairs of damaged distribution transformers. The DDC was informed that tendering process of all works under Rural Development sector have been completed and allotment process has also been finalized while various physical works is also going on with full synergy and all targeted works shall be completed in set deadlines. The DDC asked the BDOs of all Srinagar Panchayats to expedite the process of PMAY cases in their respective Blocks so that all eligible persons are entitled to the benefits under the scheme. The Assistant Director Handicrafts apprised the DDC that as many as 310 income generating units have been established in different crafts such as Ari-Sozni, Wood carving, Paper Machie, Pashmina spinning, Pashmina weaving, Crewel weaving, Carpet weaving and credit to the tune of Rs 3.25 crore have been disbursed among the registered Artisan/Units during current fiscal. He further informed that 8 Skill upgradation units under Karkhanadar scheme have also been established capacity building of the local Artisans, while various other measures are being taken for upliftment of Artisans. On the occasion, the Assistant Commissioner Labour highlighted the objectives of e-SHRAM Portal and importance of registration of unorganised workers on the Portal. The DDC directed Sectoral Heads of all the Departments to ensure that all unorganised workers working in their respective jurisdiction at the earliest. While reviewing works under R&B sector the DDC directed for accelerating the pace of all works to ensure their time bound completion. He also asked them to take necessary repair works of city roads within weeks’ time. The DDC was informed by PMGSY authorities that under different schemes of PMGSY-3road length of 23.38 km has been targeted for completion in Harwan, Qamarwari, Srinagar including Eidgah at the estimated cost of Rs 36.75 crore. With regard to Social Welfare and ICDS schemes, the DDC stressed the concerned Officers to carry forward the schemes in missionary mode and ensure maximum beneficiaries are covered under the scheme besides benefit of all government sponsored schemes reaches genuine beneficiaries. While reviewing the progress under Self Employment schemes, the DDC was informed that DDEC, Srinagar has provided 51 vehicles to the beneficiaries under Mumkin Scheme and 84 fresh cases have been approved under the scheme to provide livelihood to the unemployed youth of the District. The DDC also directed the CMO Srinagar to improve the progress under PM-JAY SEHAT and cover all beneficiaries under the Health scheme by issuing Golden Cards. Among others, the meeting was attended by Sub Divisional Magistrate West, Akshay Labroo, Chief Planning Officer, Mohammad Yaseen Lone, CDPO/ICDS, Zeenat Ara, Deputy Director Employment, Assistant Commissioner Panchayats, Superintendent Engineers of R&B, PDD, PHE, PMGSY, Chief Education Officer, Chief Medical Officer, District Panchayat Officer and all Sectoral Officers.