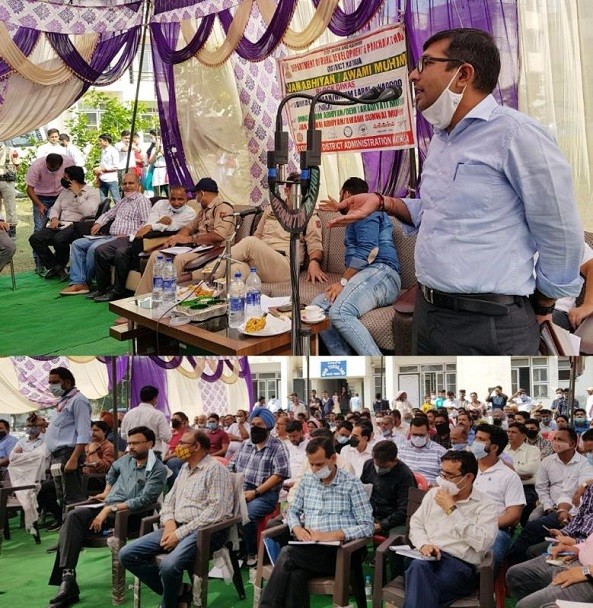 Scores of individuals and deputations led by PRIs put forth the issues related to the development and other amenities of their respective areas. Sarpanch Jakhbar demanded signages and speed breakers on main Nagri- Kathua to minimise accident rate in the area. He also demanded early restoration of protected area affected by recent rains and floods.

President MC Nagri, Anil Singh projected the demand for provision of land for Sports Ground and addressing the problem of drinking water scarcity in different wards of Nagri town. T

he DC gave a patient hearing to the demands and problems of the people, passed on the spot instructions to the concerned departments for redressing the issues in stipulated time frame.

The DC disclosed that the Panchayat wise projects under Jal Jeewan Mission have been submitted for all 256 Panchayats which will cater to the drinking water demand of rural areas. He also assured that the road widening work on Nagri- Kathua and construction of Airwan Mandir road will be taken up at the earliest.

He directed Revenue officers to identify land for Sports ground and Panchayat Ghar in consultation with the elected PRIs. He informed that the government has issued directions to identify all Divyangs in need of Prosthetic aids including wheelchairs, hearing aids, Motorized tricycles, scooties and other aids in association with ALIMCO.

He appealed to PRI and ULB representatives to submit all related cases through the Social Welfare department. He appreciated the people of Nagri for achieving 100% first dose of Covid Vaccination and advised them to take the second dose at due time.

Earlier, SSP Kathua R.C Kotwal appealed to people to cooperate with the police authorities in curbing the menace of drug abuse in Nagri.

He said Police have lodged over seventy FIRs on people involved in making illicit liquor and drug peddling.