Jammu, Oct 10: In December, 2010, Div Com Kashmir , who happenned to be Chairman of so called UTEIC reccomended to Pr Secretary, H&UDD for abolition of UTEIC  & however, since years UTEIC is not being implemented in Srinagar but in Jammu Municipal Corporation & Jammu Development Authority in Jammu different yard stick are being adopted causing harassment to innocents.

Following the public harassment complaints were submitted to Pr Secretary, H&UDD, Div Com Jammu, Commissioner, JMC & VC JDA regarding different conditions being adopted by JDA despite same CTP of Town Planning Organization, Jammu, he alone being Member Secretary of UTEIC but till date no concrete steps have been taken regarding the issue causing harassment to innocents, whose buildings fall under the jurisdiction of Jammu Development Authority raised a pointer towards working of all concerned officers?

Pertinent to mention here that in the year, 2016 even High Court orderd that UTEIC is a non statuotary body by which an order was issued by CTP, Srinagar, with copy to Pr Secretary, H&UDD  & thereafter no plan was sent to UTEIC at Srinagar & same CTP, worked for around three years as CTP, TPO, Jammu but preferred to close his eyes to recommend same treatment for Jammu people,  but adopted two different yard sticks for JMC/JDA regarding UTEIC.

Therafter, on acomplaint, Div Com Jammu, sought detaild report over the issue from present CTP, TPO & in turn he informed that the said different yard sticks are still being adopted in the cases of building permissions in JDA & JMC, which clearly speaks of work culture & harassment to Jammu people, which is no doubts a matter of high level enquiry?

However, Div Com's communication dtd. December, 2010, copy with CTN clearly speaks the facts as under:- 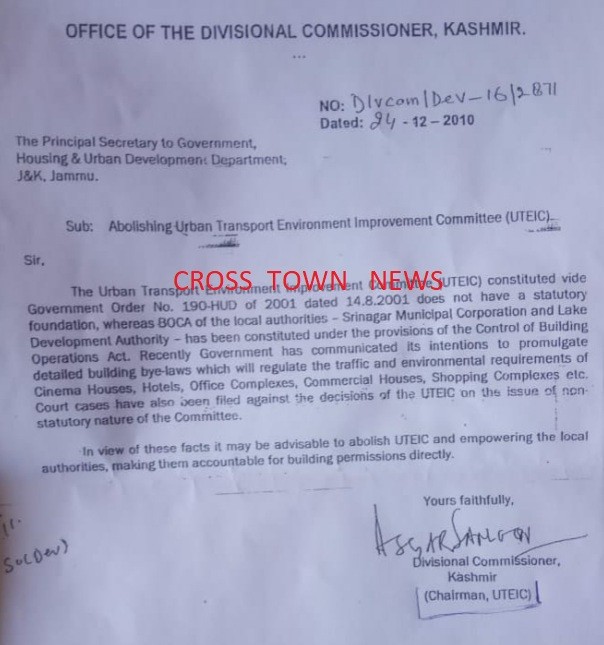