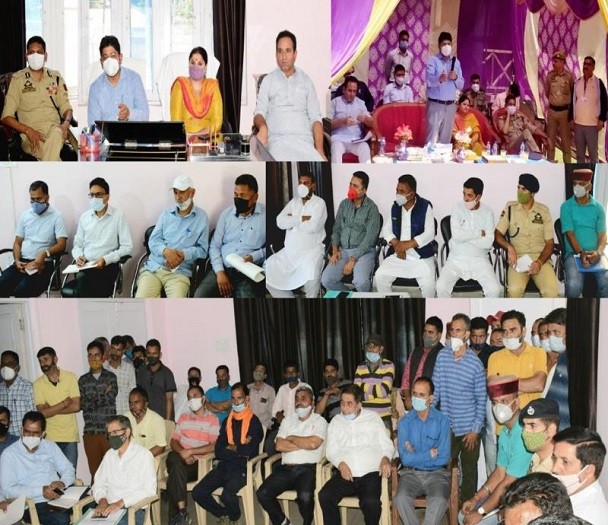 KISHTWAR, SEPTEMBER 14: Divisional Commissioner Jammu, Dr Raghav Langer and Additional Director General of Police, Jammu, Mukesh Singh today conducted a day long tour of the far flung areas of Tehsil Dachhan and block Paddar of District Kishtwar and interacted with the delegations led by PRIs and listened to their grievances besides reviewed the progress on the restoration works in cloudburst hit areas.

The delegations at Paddar highlighted scores of grievances and issues and sought up-gradation of local infrastructure; functioning of Ishtiyari CD Block; Electrification of village Sazar; Installation of Telephone tower at Sazar and Sohal; creation of special Division for Public works Department; ATM facility at Atholi, restoration of damaged Machail to Sucham road, adequate staff in Government offices, maintenance of drainage system in Gulabgarh, tapping of adventure tourism potential including river rafting, Skiing, Paragliding; facility of helicopter for lifting of patients at the time of Emergency; up-gradation of Chisoti Sub Health Centre, Playground at Gulabgarh with modern facilities.

The Div Com assessed the damage caused due to cloud burst to the property and crops by the recent cloud burst in Paddar including Erosion of land due to flood at Huryangwari, Matti village. He directed the concerned authorities to expedite the restoration works in flood hit areas to mitigate the problem of affected people.

During the interaction with the PRIs and local delegations at Dachhan, the people demanded employment for the NOKs of flashflood victims besides restoration of electricity and water supply.

The Div Com listened to their grievances and assured them that all their genuine demands and issues will be redressed at an earliest with all possible efforts.