Home » News » J and K » Where is standing order 22 in J&K: DC/SDMs accorded verification certificate as per instructions?

Jammu, July 22: Pertinent to mention that Standing Order 22 stands itself issued by Government for every six monthly girdawaries of lands to record the actual status of land on the day but none of the officer did it in actual caused harassment to innocents on ground.

On the negligence on the part of Revenue bosses the status of lands could not be entered in the revenue records as per Govt orders but none of the top boss bothered to act on such officers, who are proved cases of deadwoods.

However, the FCR issued a circular dated. 25.03.2011, which was further forwarded by Div Com on 06.09.2016 by which it was categorically ordered to verify the status of land by visiting on spot by Patwaris in a transparent & accurate manner.

Now, it is matter of high level enquiry that whether an DC/SDM/ACR/Tehsildar had accorded verification certifice on every six monthly Girdawaries & how many actual entries of  actual status of lands has been done, where big constructions/houses had been constructed since 25.03.2011 & Gair Mumkin Khad issue would have not existed.

However, the communication of Div Com. if gone thoroughly, copy with CTN is self explainatory. 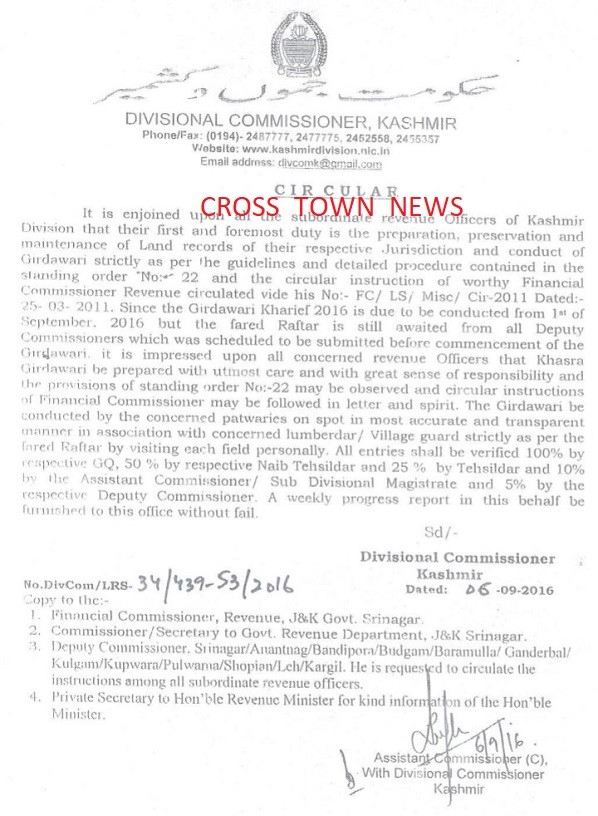