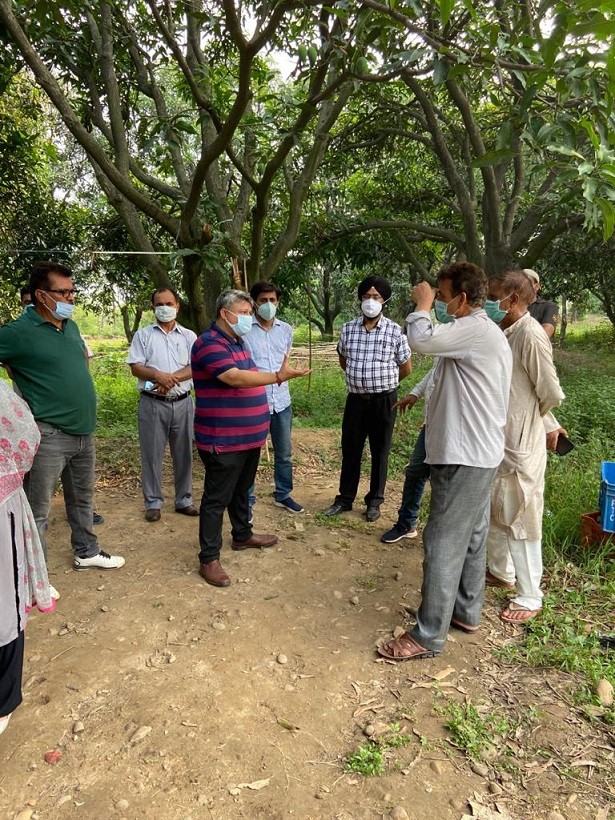 Jammu, july 19: Director Horticulture Planning & Marketing Vishesh Mahajan as part of his endeavor to reach out to farming & trading community at every nook and corner visited Mandis & Farms in Jammu Division located at Bishnah, Samba and Kathua to review the functioning of Mandis as also to ensure better Synergy among various Departments.

He also visited Gate way to the Union Territory of Jammu & Kashmir, Lakhanpur along with Deputy Director Jammu , Executive Engineer, and other officials of the department. In his interactions with the staff members, stakeholders and growers,

Director emphasized on the need for a conducive environment in Mandis which can be achieved only by adhering to rules and regulations by all.

Highlighting the important role of the department in the development of Mandis and protection of its assets, the Director asked the Stake holders especially those carrying trade in the Mandis to fully cooperate with the authorities so that the goal of overall progress of farmers and horticulturists is achieved.

During an interaction session with the applicants of the ODOP PM-FME Scheme and other Agripreneurs, Director Horticulture (P&M) stressed upon utilization of the raw material only from the local growers so that the farmers may feel encouraged and usher into the cultivation of the spices and other farm produce.

He encouraged them to take full benefit of departmental schemes and guided them that until and unless we don’t explore new ideas of operation and marketing, then only can today’s youth find business opportunities for themselves in Agriculture and horticulture.

The Director visited the Mango Orchards in Village Chadwan and interacted with Farmers especially Progressive farmers Sh. Khem Raj and Panchayat Members deliberating on the various schemes available for farmers which can benefit them immensely.

In his interaction with Progressive growers and PRI’s ,the Director asked them to work in Unison and Synergise their resources and efforts so that the farmers could get the best pricing for their crops while reducing the wastage as well.

The Director Instructed the works wing to come up with proposal for construction of Farmers Market at Tapyal and at Lakhanpur.

He also instructed AMO Kathua to ensure that the Apni Mandi Chadwal infrastructure is put to immediate use.

He further directed the AMO Kathua to Coordinate with National Highway Authorities and also with State Taxes Department to establish a small Counting Centre at Lakhanpur Toll Plaza to ensure proper data of export and import of Fruits & Vegetables.