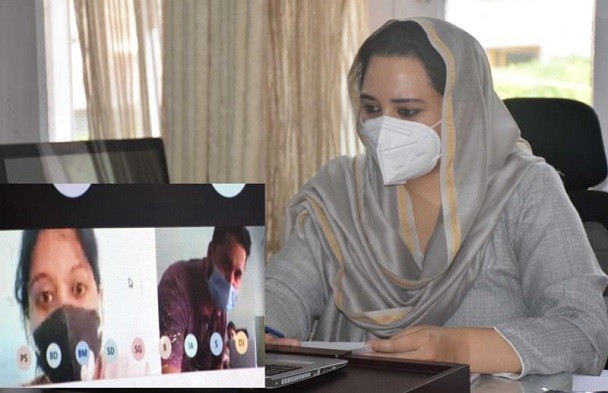 SRINAGAR, JUNE 9: Mission Director Jammu & Kashmir Rural Livelihoods Mission (JKRLM), Dr Syed Sehrish Asgar today emphasised on the field workers of the Mission to focus more on developing gender based enterprises like setting up of low cost Sanitary Napkin units, which will not only improve the menstrual health of rural women folk but is also affordable to them.

These remarks were made by her while chairing a review meeting of the Mission for district Jammu. The meeting was attended by District Programme Manager, Block Programme Manager and MIS Assistants of blocks Akhnoor, Bhalwal, Bishnah, Dansal, Khour, Marh and other officials from the MD office.

Dr Sehrish maintained that Umeed scheme is extensively based on capacity building and strengthening of community based institutions by federating women in hierarchal Community Based Organizations (CBOs).She exuded hope that it has a great potential to dovetail the individual efforts of these women to achieve bigger and substantial goals.

Further addressing the officials she said that JKRLM (Umeed) scheme has given a significant platform to the SHG members to access capital and the bank loans for enhancing the chances of their livelihood earning.

She culminated that the scheme has produced role models for both men and women and encouraged them to come out of poverty and upscale their standards of living.

Dr Sehrish instructed the officials that funds released by the Mission to the CBOs should be ensured to be released to the SHG members immediately to be invested in their livelihood activities. She directed them to upload the progress on the National MIS subsequently.

The MD also impressed upon the officers to undertake on priority the livelihood convergence with different departments and schemes especially in PMFME for augmentation of their livelihoods further.

She called them to organize the SHGs having common agriculture related livelihoods into Farmer Producer Organizations (FPOs) to make their returns attractive.

In addition, the SHGs have been credit linked with the banks to the tune of Rs9507.50 lakhs. The SHG members have invested the amount in different livelihoods like dairy farms, fish ponds, bee keeping, poultry units etc. Besides under convergence various livelihoods initiatives have been successfully initiated with the help of other line department.

Dr Sehrish advised the officials to further strengthen and promote enterprises for enhanced livelihoods both in farm and non- farm activities.