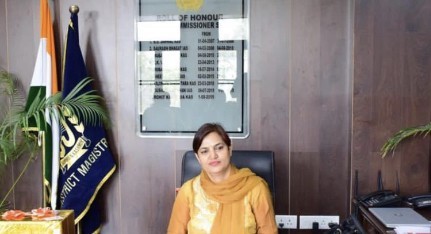 SAMBA, MAY 08: Deputy Commissioner Samba Anuradha Gupta today constituted an inquiry team to probe into the complaints of overcharging by the private hospitals. Following the reports of excessive charging by a recently designated non-Covid hospital in district

An inspection team headed by Assistant Commissioner Revenue, Jatinder Mishra visited the Kristu Jyoti Hospital, and enquired about the reports of overcharging by the hospital administration from patients visiting OPD.

The Deputy Commissioner Samba issued strict warnings and sought detailed enquiry report from the inspection team against the hospital before initiating action under Disaster Management Act 2005.

The Deputy Commissioner further directed the surveillance teams to conduct survey of all private hospitals in the district and ensure that no case of overcharging or any kind of irregularities are found.

Directions were given to CMO to stay watchful about reasonability of fees charged by different hospitals and private nursing homes for OPD and other services.

He was asked to ensure that the list of fees be also displayed prominently in private hospitals.

Deputy Commissioner Samba also exhorted upon all the stakeholders to cooperate and comply with the standing government orders.