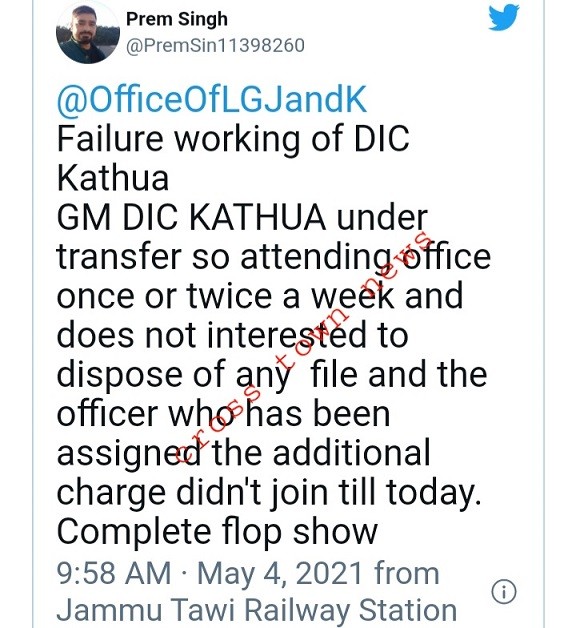 Jammu, May 06: The Jammu and Kashmir Government had promised Industrialist for so ease of doing business but lot of unit holders under District Industries Center Kathua allege that their files were not being cleared in time.

They added that some officials of GM Office, Kathua are creating hurdles in smooth implementation of schemes and clearance of files making the scheme as a big failure.

The recent Industrial Policy of J&K stressed on multiple initiatives in ease of doing business. Jammu & Kashmir Single Window (Industrial Investments and Business Facilitation), Act 2018 focuses on creating an investor friendly environment and improve ease of doing business in the UT. This is being facilitated by providing accelerated and time bound grant of various licenses, permissions and approvals, promoting industrial development and facilitating new investments as well as by simplifying the regulatory framework by reducing procedural requirements and rationalizing documents.

A Twitter user Prem Singh, copy with CTN reads as, “Failure working of DIC Kathua GM DIC KATHUA under transfer so attending office once or twice a week and does not interested to dispose of any file and the officer who has been assigned the additional charge didn’t join till today. Complete flop show”. `

Another industrialist told CTN that he had applied for change of line of activity as he planned to start a different unit than what he had planned for but till today DIC Kathua has failed to allow me to start the unit I am planning for only because of the lackadaisical attitude of officials.