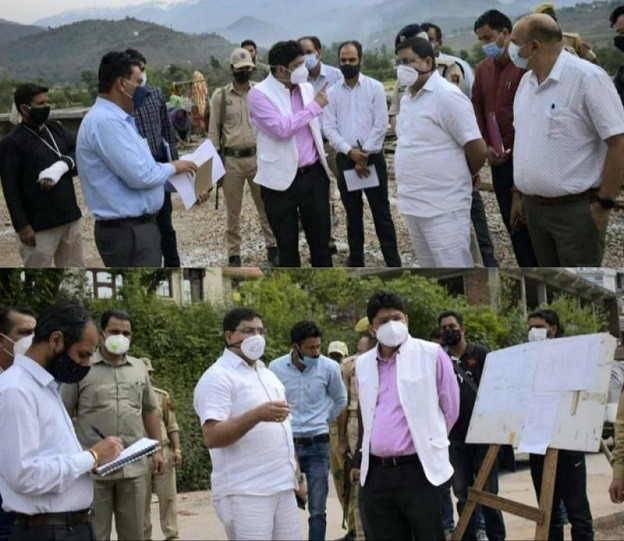 At the outset the DDC gave brief description of the district profile and the physical and financial progress of the various department projects being executed under languishing scheme, District Capex, Back to Village, MGNREGA,14th FC. He also gave details of several welfare schemes being implemented by different departments in the district.

The Div Com, while assessing the Education sector, directed the Chief Education Officer to evaluate to improve the women Literacy rate across the district, take measures to reduce school drop-out rate, besides conduct a survey to identify the dropouts and put in concrete steps for bringing them back into schools.

About the Jal Jevan Mission, the meeting was apprised that as many as 264 projects have been approved under at an estimated cost of Rs. 1240 crore and the DPRs of all the projects stand prepared.

It was further informed that the work on repair of the old hand pumps has already been started and all possible measures are being taken to provide hassle-free water supply to the households of the district.

While taking a review of the Power Sector, the Div Com took a detailed review of progress achieved under various centrally sponsored schemes including DDUGJY, PMDP(Rural), IPDS, PMDP(Urban). He directed the concerned Executive Engineers to complete the work on all the projects within set deadlines.

The Div Com also asked for developing a blueprint to enhance the agreement load and the revenue realisation. The concerned Executive Engineer of the JPDCL was directed to put up a note to the DDC about the assets which are pending energization for want of inspections and formal handover takeover.

Regarding the progress of NABARD funded projects, the Div Com asked the DDC to take a comprehensive review of the RIDF schemes being executed in the district and resolve the issues, if any. About the PMGSY Department, the meeting was apprised that 319 schemes were sanctioned in Budhal and Rajouri sub division in all the nine phases, out of which the work on 224 schemes have been completed and the work on 95 schemes was in progress.

The concerned Executive Engineers were directed to ensure that the work on all the remaining schemes is completed by the end of March 2022. While reviewing the RDD sector, the Div Com directed the ACD to complete the work on all the pending works of the previous financial year besides, asked him to conduct a third-party verification of the projects.

Regarding the houses being constructed under PMAY, the meeting was informed that the work on 32441 houses, the work on 5962 is complete. It came to notice that there is a huge gap between the first and second instalment under the scheme. Div Com directed the ACD to fill the gap and ensure timely payment to the beneficiaries.

He was also directed to hold regular meetings with the BDOs for achieving the desired results. Regarding Ayushman Bharat PM-JAY SEHAT scheme, the Div Com directed the concerned to take the necessary support from all the line departments and continuous mobilisation of Arogya Mitras and Asha workers so that the registration shall be expedited, besides asked to verify the pockets where the registration of beneficiaries under the said scheme is low.

The CMO was directed to identify the low progressing areas and should focus on the areas for better results. Similarly, the progress concerning COVID19 testing and vaccination drive being carried out in the district and other welfare schemes of the Health Departments including NHM, Janni Suraksha Yojana besides other important schemes of the Department were also reviewed in depth. Under IWMP, the work on 176 projects out of 393 is complete and the rest are under different phases of execution, the Div Com asked the concerned officer to ensure the work on the remaining projects is completed within the shortest possible time.

The Div Com directed the concerned officer from the Social Welfare Department to furnish the list of the eligible left out beneficiaries under Old age, Widow pension and the physically challenged to the concerned authorities so that they can be provided with the necessary relief under the social assistance schemes.

The Div Com also directed the AD FCS&CA to ensure a hundred per cent aadhar seeding of all the beneficiaries under NFSA and non-NFSA. He has also been directed to identify the pockets which have less aadhar seeding percentage and organise special camps to cover the left out beneficiaries.

Chief Animal Husbandry Officer has been directed to identify the pockets which have huge potential in the dairy sector and take concrete measures to enhance milk production in the district besides he has also directed him to constitute Self Help Groups of the farmers for marketing of the dairy products.

He was also asked for holding of animal sale and purchase fair in the district. Chief Horticulture Officer informed that Rajouri has a huge potential in Apricot crop.

Div Com directed the concerned officer to submit a proposal in this regard so that the cultivation of the said fruit is enhanced in the district and necessary benefits are provided to the farmers. He also informed the chair about the Ultra High Density plantation in the district. While reviewing the Fisheries sector the Div Com asked him to construct more fish ponds in convergence mode with MGNREGA and establish more fish selling points in the district.

The Div Com also directed the DDC to look into the working of the OSC and ICPS about the services and the disposal of the cases. Similarly, the Div Com also took a detailed review of the PM social security schemes including PMJDY, APY, PMJJBY, PMSBY, PMMY, PMUY, PMGSY, PMEGP, Poshan Abhiyan, PM Kisan, KCC, soil health cards, ICPS, BADP, BBBP, housing for all, PMAY-U and other schemes being implemented by different departments in the district.

The Div Com directed the officers to remain stationed at their respective Headquarters and make the best possible efforts to redress the grievances of the general public and ensure hundred per cent transparency and accountability in the functioning of their Departments. He also advised the Officers to set targets. It was also decided in the meeting for a survey about the shadow and low connectivity areas in the district.