Jammu, April 17: In continuation to previous publications against illegalitys committed by one boss, Jagdish Hans, DTP, JDA & mailed to Pr Secretary, H&UDD & VC JDA but till date no actions stands taken against the culprit gives a bad name to JKUT administration as a whole.

However, a plan was submitted to JDA office with due receiot No. 6325 dated: 22.12.2020 but the incompetancy & lack of knowledge speaks from the communication of  the boss DTP dated. 2.2.2021, who is on deputation to JDA as DTP but illegally assigned the charge as  CTP , two steps up in violation of deputation rules despite lapse of  deputation period of more than 4 years, which is in open violation of Deputation Rules as it cannot be extended beyond a period of 4 years in  any case.

Pertinent to mention here that despite orders of framing of Zonal Plans simultaneously in Development Act of 1970 after issuance of Master Plan in March, 2017 for more detailing of land uses, the said DTP till date despite lapse of more than 4 years did not acted for zonal plans causing harssment to innocents for sanction of building permissions by fixing land use on his own in absence of Zonal Plans causing loss of crores to JDA, which would have earned by way of permission fee.

However, he himself in a reply to Griveance cell agreed that Zonal plans are must for more detailings of land use classification but sleeping over the issue.

However, his illegal rejection letter dated. 2.2.202 speaks that "Convience Shopping Centre is permissible only for approved housing colonies as per clause 13.6.1.3.e" but it is a matter of high level enquiry against his negligence that the said section only pretains to Housing Colony's openly speakes of his vested considerations or lack of knowledge or intentions to harass innocents as it has no concern in private lands as per Section 13.6.1.

However, Section 13.6 of Mater Plan of 2032 speaks of uses permitted in various land use Zones are given under & governed by hierarchy of road network as spelt out at 13.5 of these DCRs & road width shown in that construction is 55ft wide, which cover the norms but otherside he commentted that area is residential but the 15 m thorough wide road is required, but "thorough" word exists no where in bye laws & it is his own creation?

Above all it is to mention here that in Section 13.6.1, it clearly speaks of Permitted uses in residential areas & the said construction falls in the said catagorey but the boss DTP showing his superpowers in violation rejected the said plan as otherwise big constructions/Godowns had been constructed nearby the said plot since years, details are with CTP by way of google map of the plot but he preferred to close his eyes over those huge constructions, which raised a pointer towards the DTP, Jagdish Hans & needs a high level enquiry against him for such a big violations of Govt orders & non compliance of Govt orders for not framing Zonal Plans, which would otherwise had clarified land uses in particular Zones & in absense of those he is harassing the concerneds.

It is an issue of actions against the boss to save genuine ones from cruel clutches of such kind of officer in open violations of Govt orders, who are otherwise proved cases of deadwoods.

However, below snapshot, if enquired wrt to his communication dtd. 02.02.2021, the issue which he decided on his own without placing in BOCA  by a high level enquiry committee shall blast DTP's vested considerations or lack of knowledge or any other issues. 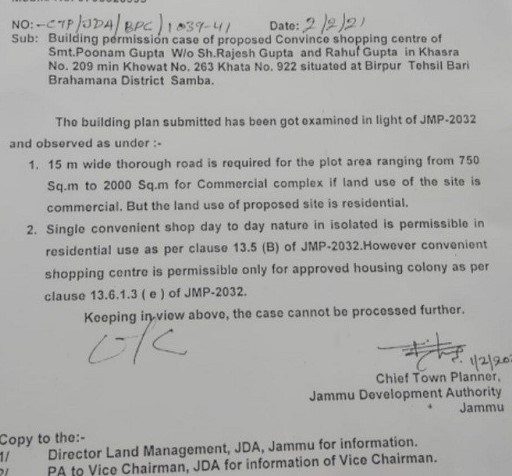 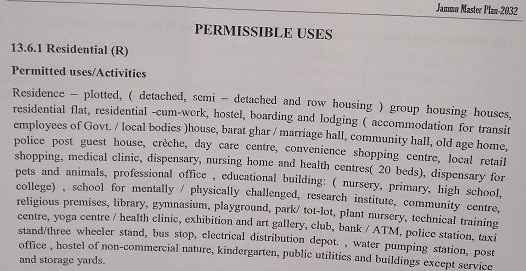