Home » News » J and K » Floral decoration and colourful illumination at Shri Mata Vaishno Devi Shrine during Navratras to be telecast on April 17, 18 and 19 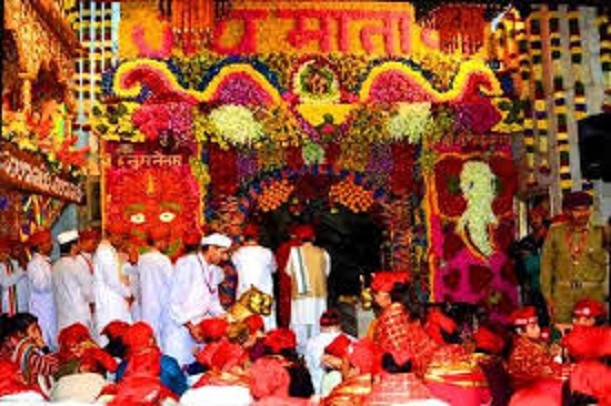 KATRA, APRIL 16:  Shri Mata Vaishno Devi Shrine Board is continually taking a number of new initiatives for facilitation of the pilgrims visiting the Holy Shrine of Shri Mata Vaishno Devi Ji. Besides making elaborate arrangements for the pilgrims visiting the Holy Shrine especially during Navratras, the Bhawan of Shri Mata Vaishno Devi Ji, Atka and the area surrounding it, tracks leading to the Shrine and the buildings nearby have been tastefully and artistically decorated with exquisite fresh flowers of varied varieties brought from various parts of the country and abroad. As one starts the trek towards the Shrine, flowers of all hues adorn the way giving it a colourful and festive look. The illumination of Bhawan area with attractive and colourful lights has further added to the ambience of the surroundings. These decorations are just breathtaking and festive making it a special visual delight for the pilgrims after trekking about 12 km track from Katra to Bhawan.

Keeping in view a comparatively less number of pilgrims visiting the Shrine during the current Navratras in view of the pandemic, the Shrine Board has taken yet another initiative to telecast the floral arrangements and colourful illumination of Bhawan area, especially for the devotees who are not in a position to make it to the Shrine. This telecast will be available on MH ONE PRIME and SHRADDHA MH ONE Channels for three days from 17 April to 19 April 2021 during Navratras. The MH ONE PRIME will telecast this programme from 17 April to 19 April daily at 5.30 p.m., while it will be telecast on SHRADDHA MH ONE Channel from 17 April to 19 April twice daily at 5.00 p.m. and 6.30 p.m. With this facility, the devotees worldwide will be able to witness the colourful decorations through the Channels on their TV screens.

Mr. Ramesh Kumar, Chief Executive Officer of the Shrine Board said that in the recent past the Shrine Board has taken a number of new initiatives for the facilitation of the devotees. These, interalia, include live telecasting of Shat Chandi Maha Yagya from 11.30 a.m. to 1.00 p.m. daily during the ongoing Navratras. Besides live telecast of the Morning and Evening Atka Aarti, there are also live darshans of Maa Vaishno Devi’s Pindi Roop every day during morning and evening Aarti which was introduced during the last year’s Navratras.