Jammu, Feb 23: Stories of harassment by the bosses of Jammu Develoopment Authority are countless but depite complaints the bosses preferred to close their eyes over the issue speaks of work culture in the said Authority?

Lot of complaints were flashed to Pr Secretary, H&UDD/VC JDA regarding some illegalities being committed by the officers/officials of JDA causing harassment to general public but the bosses as usual preferred to sleep over the issue is no doubt a matter of a great concern.

Main issue is on the part of one officer, who has been illegally assigned the charge of CTP, JDA, who preferred to delay the routine works of the office regarding building permissions in open violation of guideline of Master Plan of 2032 & contradicted with procedure being adopted in JMC for building permissions, cleraly proves his malafidies, vested considerations or lack of knowlege, which is otherwise giving loss of lakhs per month to JDA as permission fee?

Pertinent to mention here that all offficials of this officer want to wok & are working but if crackdown is made in his office & record be secruitinized the factual position of his individual working shall come out.

However, an application under RTI was filed to PIO, JDA on 10.01.2021 regarding some information but despite lapse of  40 days the said office did not bother to repy till date again raised a question mark on the part of the said department & the boss?

However, simple contents in the application are evidiently clear from the below snapshot & for not replying Ist Appeal has been filed to Ist Appeallant Authority of JDA. 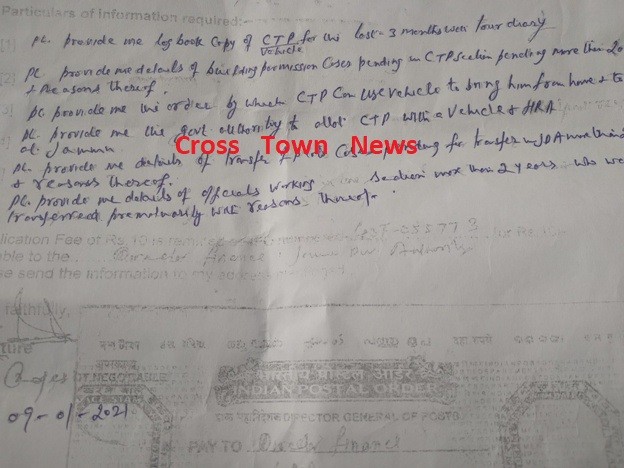