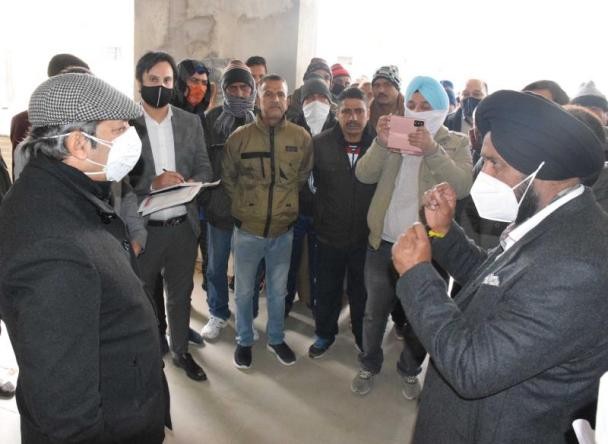 During his visit to Satrayan, Advisor enquired about the Community Development and Panchayat Works programme and directed the officers to complete all the works within the set deadline. He said that there should be strict monitoring of works on regular basis for smooth execution of projects.

Advisor was informed that out of 210 works under CD panchyat, 206 have been completed. He was also apprised about progress and achievements made in the block till date under PMAY, MGNREGA and other works taken up under Back to Village programme.

Advisor emphasised on creation of durable and sustainable rural infrastructure and urged for early completion of works identified in Back to Village Programme. He also directed the officers for involvement of District Development Council and Panchayat members in identification of development needs and requirement of their respective blocks and villages.

Advisor also inspected various works being executed in the area and enquired from the concerned PDD officers about the need to upgrade power infrastructure there & directed the officers to personally monitor progress under Pradhan Mantri Awas Yojana, Swachh Bharat Mission and gear up their efforts so that all deserving should be covered under these schemes. He also visited the Government Middle School, Gharana and inspected renovation works executed in the school playground, levelling and demarcation works that have been completed under MGNREGA.

A delegation of people from the area demanded construction of community hall and playground in their locality besides raising other development issues. Advisor assured the people that all their genuine issues would be looked into for an early redressal. Advisor also asked PDD officers to submit a report regarding up gradation of power infrastructure in the area.